When elated inventor, John Moody, sends details of his ground-breaking invention to a Silicon Valley company – the last thing he expects is an evil pursuit against his own family. Written by a leading retired intellectual property lawyer, ‘The Patent’ proves that something you invent could one day be used as a reason for one to try to maim and blind you, your wife and teenage daughter.

Gainesville, GA -- (SBWIRE) -- 11/12/2012 -- Millions of inventors dream of seeing their hard work come to fruiting in the real world. However, as the protagonist of Robert Bruce Kennedy’s latest book quickly learns, perusing his dream puts his entire family at risk of disfigurement and eternal blindness.

‘The Patent’ is, in short, like no other thriller ever written.

“When John Moody accidentally discovers a simple cure for nearsightedness and farsightedness he submits his invention to Zandox, a Silicon Valley company, which summarily rejects it. It is when he and Zandox later clash in a battle over patent rights that one by one members of the Moody family come under increasingly vicious personal assaults, one eye at a time.”

The book’s story wasn’t plucked from thin air. In fact, Kennedy himself spent over four decades as one of Silicon Valley’s and Atlanta’s most respected patent lawyers. His experience and wisdom is proven with each turn of a page.

“My book provides insight which is brought to life through my experience as a seasoned patent lawyer,” says Kennedy, who also headed a successful private practice in Georgia.

He continues, “It takes a real-world process that happens every day, an inventor trying to protect his idea while submitting it to a company for commercial development, and adds in the fictional twist of an evil scientist who steals the idea as his own.”

“A thoroughly suspenseful page turner in the tradition of John Gresham and Stephen King. Twists and turns keep you seeking more even after the novel's skilful conclusion. I am eagerly awaiting Mr. Kennedy's next thriller,” said W. G. Kuh, who reviewed the book on Amazon.com.

Summing up his novel, Kennedy has some wise words for his readers.

“Be prepared for some very chilling scenes. You never knew patent rights could be so scary!”

‘The Patent’, published by Outskirts press, is available from Amazon: http://amzn.to/RJNLnT and from Barnes and Noble.

Two more blocks. Nothing. Another block and their headlights caught a glimpse of a bike to their left, just off the road. John stopped while leaving the engine running. They both got out and walked over. It looked like Alice's, but there were so many like it.

Then Betty saw the small license plate. She bent down to see the numbers. She mumbled the numbers aloud. "7 6 6 6. 7 6 6 6. The lucky devil." Betty sank down onto her knees. Tears welled up in her eyes. John stood there staring. "Is it , is it hers, hon. Is it?" Betty nodded. "How do you know?" "7666. The luck devil number." Then she emitted a primeval howl and started pounding the ground.

About the Author: Robert Bruce Kennedy
Robert Bruce Kennedy, the author, is a retired patent lawyer. His 40 year career in intellectual property law was concentrated on work in the high technologies of Silicon Valley that was followed by private practice in Atlanta. 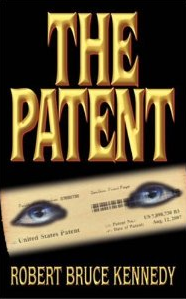