Then, the campaign welcomed fans at the Preakness Stakes.

And now, The People's Horse campaign, the first-ever project to crowdsource a racehorse, is finishing up its own Triple Crown on June 11th at the Belmont Stakes, too. The campaign has already raised more than $37,000 and has more than 220 "Founding Stablemates," making it the largest racing club in the U.S. In both Louisville and Baltimore, the project saw the unleashing of throngs of fans eager to meet its stand-in fiberglass horse. Hundreds of people of all ages, races, from across the globe have already submitted possible names for the forthcoming horse on the traveling mascot. The Belmont Stakes will be no different.

True's one-of-a-kind project is designed to give anyone the experience of what it's like to be a racehorse owner. The campaign is structured in tiers, and the first round of fundraising will pay for a year of stabling and training fees. The second tier is set to go toward buying a horse.

"The Belmont Stakes is the most grueling race, a test of grit and endurance, and fitting for The People's Horse," said Geoffrey Gray, a bestselling author, longtime journalist and founder of True.Ink, the experiential magazine that started the campaign. "It's fitting that we'll be there, growing our Stable, and continuing to take the old Sport of Kings and making us all Kings of the Track."

Gray and The People's Horse team will be at The Belmont Stakes starting today, and with their stand-in for The People's Horse, a life-size fiberglass house that fans have been signing with horse names and that has become the focal point of the campaign. 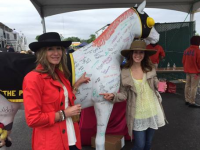