Los Angeles, CA -- (SBWIRE) -- 07/27/2020 -- Do a good job and they'll ask you back. This proves true for Joel Courtney, who will reprise his role as Lee Flynn in the teen romantic comedy The Kissing Booth 2, released Friday.

Courtney introduced the character in The Kissing Booth, the teen romantic comedy that was distributed by Netflix and proved to be the most re-watched films of 2018.

Courtney, who is familiar to film lovers from his lead role in the J.J. Abrams-directed and Steven Spielberg-produced Super-8, was trained in his craft at The Playground Acting Conservatory. The Playground Acting Conservatory is a young actors studio in Century City founded by renowned acting coach Gary Spatz (The Mickey Mouse Club, Judy Moody and the Not Bummer Summer, The Suite Life of Zack and Cody, Everybody Loves Raymond).

Spatz, who is considered one of the top child acting coaches in the world, first met the promising young actor when Joel Courtney enrolled at The Playground. After only a few classes, Courtney was invited to audition for Super-8, and Spatz worked overtime to get him ready for the opportunity.

"It was exciting to see a young actor grow and develop so quickly," Spatz said. "Joel had 11 callbacks and multiple screen tests for the Super-8 role, and everyone had a feeling about him."

That feeling, the result of Spatz's 25 years of experience in the industry, was spot-on. It resulted in a 2012 Saturn Award for Best Performance by a Younger Actor. Though Courtney, a resident of Moscow, Idaho, was just dipping his toe into the acting pool when he enrolled at The Playground, it turned out the water was fine, and he decided to stick around California and learn what he could about his craft.

After getting his start in Super-8, Courtney has worked steadily in film, but he found one of his most distinctive roles as The Kissing Booth's Lee Flynn — friend, romantic partner, and kissing booth coordinator. It's a popcorn movie, in that audiences can't seem to stop consuming it, according to Netflix viewing stats.

It's no wonder that the production arm of Netflix was quick to follow up the successful production with its sequel, The Kissing Booth 2, where Courtney's character weighs his feelings for his friend Elle while preparing to head off to college.

"We could not be prouder of Joel," said Spatz. "Audiences have determined that he is someone they want to see on screen, and that draw has been apparent to us from day one. We are so excited to see him continue in film, and we're eager to see where he goes from here."

The Kissing Booth 2 stars Joey King, Joel Courtney, and Jacob Elordi, and it is based on a book written by an actual teen at the time, Beth Reekles of Wales. It is directed by Vince Marcello with a screenplay by Marcello and Jay Arnold. Its production company is Komixx Entertainment.

About The Playground
The Playground is a young actor's conservatory: a place where actors are immersed in the craft of television and film acting. Young people of all ages look forward to taking part in The Playground's carefully developed curriculum, one that has been personally designed by Gary Spatz, one of the top child acting coaches in the world. 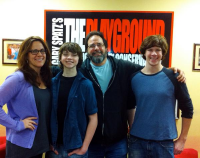