The Weiss Gallery is currently exhibiting the latest works of New York artist and filmmaker Marko Stout, “Chelsea Girls” at their Los Angeles Gallery until 7/31/14.

New York, NY -- (SBWIRE) -- 07/18/2014 -- The Weiss Gallery is pleased to announce the solo exhibition of Marko Stout’s “Chelsea Girls” at their Los Angeles Gallery. Marko Stout is a New York City based multimedia artist and filmmaker best known for establishment of NYC Microcinema, an experimental French New Wave film style. Although Marko developed his passion for art while living aboard a houseboat in the bohemian San Francisco community of Sausalito, this is his first solo California show since return to New York City in 2005.

Marko Stout utilizes both traditional static prints and film as he subverts mainstream conceptions of female sexuality in his latest exhibition “Chelsea Girls”. In this multi-media series, Marko abandons the cliché of idealizing beauties as serene and attainable in accordance with fantasies of the viewer. His series opposes this convention by depicting young females as fierce and independent within their contemporary urban contexts.

Each of Marko's fresh-faced girls reveal a strong, unwavering presence, while appearing oppositional to the spectator's gaze. With their confrontational stare and unwelcoming body language, they all undermine the viewer’s observation and remain in control of their sexuality.

By confronting the spectator so poignantly, Marko is able to undermine dominant notions about sexuality. Marko opposes convention by depicting young females as fierce and independent within their contemporary urban contexts. As he depicts the females with an unparalleled sensitivity to their nature, he unveils an obscure mysticism in each woman. Ultimately, these women remind us that despite the intrinsic softness of their youth, they will not be overpowered by the viewer and by boldly confronting sexual stereotypes in art Marko Stout innovatively subverts mainstream conceptions of female sexuality.

Marko defies dominant depictions of women by replacing the elements of provocation with ferocity and urban trendiness. The girl's intense glare and oppositional body language indicates her ownership over her body, rising above the clutches of the viewer’s glance. Despite her empowerment, she is still youthful and soft, traits that are conventionally pleasing. Consequently, Marko shows that a woman's lushness and desirability can still transmit a defiant vigor that rises beyond the limits of the male gaze.

“Chelsea Girls” is an multimedia expansion of Marko Stout’s 2013 exhibition “American Dream” which was exhibited in New York City and followed was by a solo exhibition in Berlin at Die Bachmeier Gallerie in early 2014. Marko’s lasts exhibition, “Chelsea Girls” premiered at Marko Stout’s Gallery in the Chelsea area of New York City 5/2/12 thru 5/30/14. The works are now currently on exhibit at the Weiss Gallery in downtown Los Angeles, CA until 7/31/14.

About Marko Stout
Marko Stout (http://www.markostout.com) is a multimedia artist based out of New York City, best known for his stimulating narratives of contemporary urban society, where subjects often appear in a moderate state of distress, overwhelmed by their modern high-tech uber-paced environment, while still maintaining a chic detached sexy demeanor of a sophisticated twenty-first century city dweller.

Marko Stout was born in South Africa and relocated to the States as a child. He received a university degree in evolutionary biology from Princeton University and earned his medical degree from Columbia School of Physicians in New York City. Marko developed his passion for art while living aboard a houseboat in a bohemian San Francisco community. Upon his return to New York City Marko Stout rapidly established himself as a part of New York City’s downtown art scene, drawing inspiration from local street artists and the city's numerous galleries and modern art museums. 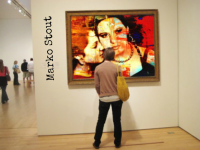 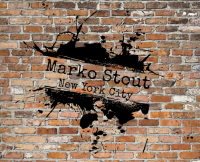