When James Finster’s Father took his own life in 2009, he struggled with the continued belief of all his Father had taught him. Having come to the realization that the way a loved one dies does not define their life, Finster has released his memoirs in the hope that his experiences can help others.

Flagstaff, AZ -- (SBWIRE) -- 09/20/2012 -- Like millions of Sons, James Finster adored his father. Responsible for shaping his character and filling him with wisdom and teachings, his unexpected suicide in 2009 left Finster wondering if all he learned still stood as true. Following the realization that his Father’s death doesn’t define either of their lives, Finster is announcing the release of his memoirs for the benefit of others.

The Reverent Surrender is that story. Funded through a hugely successful crowd funding campaign, the book is poised to shine a light of hope on those left confused and alone by the loss of a loved one.

The Reverent Surrender is an insightful memoir that tells the story of a father's dynamic and beautiful relationship with his son cut short when he took his own life. How does one retain the life lessons past on without becoming resentful of their father's decision? As an only son, James Finster, retells the memories of the life and times he experienced with his father and looks for the messages and teachings within them while finding the strength to carry on as a man and father himself.

From learning to drive at the age of eight to avoid certain death, to facing and conquering his own demons in the days following his father taking his own life, James Finster spreads thoughtful insight into the complex relationship that is the father and son dynamic. Through these memories Finster finds the strength to move forward and forgive life's ultimate sin, and honor his father while keeping his teachings close to the heart and applying them in his own life.

The Reverent Surrender reinforces the idea that a life is not lost with death, that it is truly the teachings and memories that keep the spirit alive within the hearts of those touched in their lifetime.

As the author explains, the book reaches far beyond the theme of suicide, with the potential to help anyone who is desperately in need.

“I really do feel this book cannot be stigmatized with the brand SUICIDE, it will appeal to anyone who reads it. It has the message of hope shown through the despair I felt when this occurred,” Finster explains.

He continues, “It is not a self-help book, but an examination of my life though my father's teachings and the realization that his giving up was not him giving up on me. I struggled with the belief that his teachings were negated by his suicide, but in deep contemplation and reflection I realized that a way someone leaves this world does not define their life, nor mine.”

Since its release on August 8th, the book has garnered a string of five-star reviews.

“An inside look at a boy’s relationship with his late father as he tells of their many adventures. It will make you laugh and cry. Recommended to anyone who has ever lost someone and not just to suicide. It will remind you to remember the memories, cherish the times you had with them and let go of the what if's,” says M. Templeton, reviewing the book on Amazon.com.

Another reader, Samantha, was equally as impressed.

“What I took away from this read is that life's endings are overrated and that the real substance of life lies in the journey of your experiences. Definitely a strawberry for me...I recommend it for anyone who has laughed, loved, or looking for an inspirational read,” she says.

While experiencing roaring success to date, Finster refuses to lose sight of what is important.

“Suicide and loss leaves its survivors with a bitter taste and infinite sadness. Moving on in the right way is vitally important. I want people to see that the life their loved one led is what defines them – not how it ended,” he concludes.

The Reverent Surrender: A Memoir, published by Outskirts Press, is available now from Amazon.com.

Information can also be found at http://www.thereverentsurrender.com

About the Author: James Finster
James Finster studied Literature at California State University San Marcos. He resides in Flagstaff, AZ with his wife Jerusha and two daughters Vivian and Reagan 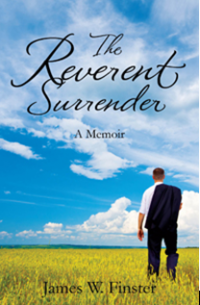