Uniquely fusing supernatural horror with real-life military action, Ron Toppings storms onto the literary scene with gusto. With his debut novel appealing to everyone from military buffs to even the most skeptical supernatural theorists – ‘The Rising’ is firm proof that an impending Apocalypse can wreak havoc on all society knows as normal.

Richmond, KY -- (SBWIRE) -- 09/13/2013 -- While many authors take their cue from a creative mind, Ron Toppings’ new novel melds gripping fiction with his many real-life experiences as a U.S. Army Counterintelligence Special Agent. Boasting a unique narrative that only Toppings could have created, readers are flocking in their droves to find out what ‘The Rising’ is all about.

In short, it’s an engrossing journey to the end of the world that sees military realism, hard-nosed action and the supernatural collaborate to spit out a book unlike anything else on the market.

The Rising is a fast paced action novel loaded with military special operations and the supernatural. Sergeant First Class Clay Hawker, U.S. Army Special Forces, is a combat veteran who is drawn into a fight that he never dreamed existed. After the murder of his wife and daughter, Hawker is recruited by Cardinal Joseph Geller and finds himself transferred as a military consultant to the Trinity Twelve Corporation.

In reality, Trinity is the 21st century version of the Holy Order of the Inquisition, whose mission is to fight evil that governments are not equipped to deal with. Hawker, along with other elite military warriors, soon finds himself battling vampires and demons. Now they have encountered the enigmatic Reverend Brian Williams and his mercenaries.

Little do they realize that soon they will be in the fight of their lives and the fate of the world will depend on them.

As the author explains, his military career adds a unique spin to his story.

“I experienced everything from life in the Far East to working at the John F. Kennedy Center for Military Assistance right here on home soil. While I didn’t ever deal with the supernatural or the Apocalypse – there’s nothing saying that future Special Forces won’t have to meet this challenge head-on,” says Toppings.

Continuing, “It’s certainly an interesting book. I challenge you to find something similar already on the market!”

Since its release, the novel has attracted a consistent string of rave reviews.

“Toppings sets and maintains an edge-of-the seat pace in the tradition of movie director J.J. Abrams and thriller author James Patterson with prose that is sparse and succinct. The Rising contains the best elements of supernatural horror thrillers and action novels. Readers will be treated to a successful cross between William Peter Blatty's The Exorcist, Joss Whedon's Buffy the Vampire Slayer, and Don Pendleton's Mack Bolen series,” says ForeWord Reviews.

Kristina Piatt was equally as impressed, adding, “I have never been one to pick up a novel involving any sort of military mention, but I'm a sucker for mysteries surrounding the inner workings of the Catholic church. I picked up this book at 4:30am and didn't put it down until 10am, when both of my young children were awake and ready to start their day. I can't wait to see what Toppings has next, as I will be certain to pick up a copy as soon as it becomes available!”

With the book’s demand set to rapidly increase, interested readers are urged to purchase their copies as soon as possible.

‘The Rising’ is available now: http://amzn.to/18MjXNp

About Ron Toppings
Ron Toppings served in the U.S. Army as a Counterintelligence Special Agent. His assignments included the Far East, the 82nd Airborne Division and the John F. Kennedy Center for Military Assistance. Ron graduated from Eastern Kentucky University and taught at the Department of Criminal Justice Training for 15 years. An avid motorcycle enthusiast, when he is not writing, he and his wife enjoy traveling and riding their motorcycles. Although Ron grew up in Southern California, he now makes his home in the Bluegrass Region of Kentucky, where he lives with his wife Mary Ellen and their dog Kody. 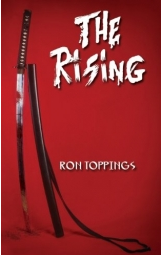