Greenwich, London -- (SBWIRE) -- 12/05/2013 -- Anyone started with Cinderella, They were inspired by Brave, They were moved by A little Princess, They love any kind of princess stories,then brace Themselves for a very unique princess story one like no other out there.

Set for an early release in 2014 The Secret Princess a feature animation film by TransTales Entertainment produce and directed Segun Williams is a captivating romantic love story full of adventure, drama, music, a fantasy animal jungle and so many twists.

The Secret Princess really is a breath of fresh air to the movie industry.

The story of Sade a princess that does not know she is one, only knowing her poor farming parents is uniquely told with captivating animation and dramatic narration.

Here is a short extract from a TransTales press release about the: www.TheSecretPrincess.com

Two babies are exchanged at child birth, a boy born to a poor farmer and a girl born to the Kings third wife. The king already has 5 daughters and no son. He is in the dark about the baby switch. Following the mysterious disappearance of the farmer, the wife is accused of been a witch and to escape any consequences she runs away with the baby girl. Talking animals - A parrot that witness the baby switch in the Palace spreads the word in the jungle, and all the animals plan to help the girl and her mother who live alone in the jungle and often sad about their loneliness. Along the line the The Prince meets the girl, they fall in love. He fight a wrestling match to become the one who gets to marry her. In the last few scenes a lot of amazing twists are revealed about many characters including the princess, the prince, the farmer and her wife, the queen and the King and of course Mr Tortoise.

The Secret Princess will premier at a film festival yet to be announced. TransTales the company behind the film is in talks with a nationwide film distribution company for it theatrical release.

The animation film which can also be seen in IMAX which really brings out the colourful African Scenery and jungle scenes throughout the film.

The Secret Princess is an amazing story with simple narratives for kids and for everyone that loves family movies.

This is a unique and beautiful film a “must see” for everyone that loves family entertainment. 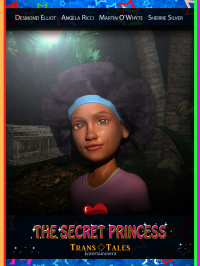