At eighty-five and more productive than ever, Myers’ latest genre-shifting novel brings him back to the literary scene with a bang.

Toronto, Ontario -- (SBWIRE) -- 02/27/2013 -- After a string of hugely successful novels followed by a hiatus, eighty-five year old novelist, Martin Myers, is back on the literary radar with his latest novel, ‘The Secret Viking’. This genre-shifting literary detective story recounts the far-reaching efforts of a literary scholar, too clever for his own good, in tracking down a clandestine 1300-year-old Viking warrior poet, possibly the world’s most prolific writer.

With many readers laughing out loud and gasping for air, this mystery leaves them not asking ‘whodunit?’ but ‘who-is-it?’ Chockablock with puzzling suspense, it takes readers on a trip they won’t soon forget. Just as they have figured it out, they discover they haven’t. When they think they finally have the answer, they are left with only the question.

“Set all over our world and in other worlds, the story leaps from past to present to future with the protagonist writing, dissembling, running, shedding families and changing costumes and underwear,” says Myers, who has achieved critical acclaim with his previous works of fiction.

The secret Viking could be your next-door neighbor; along with a suspiciously smart-assed dog, another central character. Amongst all the tomfoolery, there is something profound in the genre-bending novel, which looks at literature and the literary life in a new way.

Having released this fourth novel as a Kindle e-book, Myers has another just-finished novel ready to publish and is compiling a short story collection.

“I’m not going to say too much about it at this stage. Except that it’s full of surprises. It surprises even me,” he confides.

Since its release, ‘The Secret Viking’ has garnered a consistent string of rave reviews.

For example, award-winning author Marq deVilliers describes it as, ”Funny and witty and profound, and only Marty Myers could have written it… the wait has been worthwhile… “

New York playwright, William Barnett, was equally impressed. He says, “An amazingly creative and intuitive writer plays three card monte with his readers. A kaleidoscope of humor, suspense, history, poetry, time travel and philosophy not to be taken seriously except for when it should be.”

Critics praise Myers for his sense of humor and his unique turn of phrase, which pepper his narratives with quirks and quips. With the book’s popularity on the rise, interested readers can purchase a copy at laughably low cost with a click.

‘The Secret Viking’ is available instantly, via Amazon: http://amzn.to/YEG3wc

About the author, in his own words: Martin Myers
I was a Canadian in grad school in the U.S. when I finished my first book, THE ASSIGNMENT. A New York agent sold the book in two weeks in New York and London.

Over ten years, following my return to Canada, I wrote two more books and was in demand for readings, interviews, book tours and writing workshops. My books were taught in Canadian Literature courses. Praise was great. But somehow, work in advertising seemed easier.

A few years ago, I began writing again. THE URBAN LOFT, my first non-fiction effort, was published in 2005. Memoir, history and anecdote, but mostly jocular, it’s a sometimes hilarious tale of a 15-year search for a loft that examines the spaces we live in and how those spaces affect our lives.

I’ve just finished a fifth novel and am working on another and also compiling a collection of my short stories. 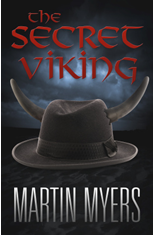