Written by David Malone, ‘The Sharecropper Prodigy’ takes readers into depression-era rural Alabama as a two best friends with different colored skin come of age. While Ben Evans grew up in a time and place where African-Americans were far from equal, his tenacity and spirit see him break down all barriers and excel. With a message that’s still pertinent to 2013 society, the novel is poised to resonate with readers around the world.

Fort Payne, AL -- (SBWIRE) -- 11/12/2013 -- While the narrative in David Malone’s latest novel is a work of fiction, it takes its bold cues from history and the lives led by thousands of African-Americans who wanted to better their lives in the 1930s. While that era has long since ended, ‘The Sharecropper Prodigy’ and its story are still as relevant today.

The book is empowering readers to excel and offers hope to those still concerned about the racial divide in the United States.

Tom Martin tells the story of Ben Evans, as well as his own eventful life as the two best friends are coming of age in depression era, rural Alabama. Tom is white, Ben is black. This sometimes creates problems in this particular time and place.

Ben Evans was born forty years too early. A black kid growing up in the height of the Great Depression in rural Alabama, being raised by an alcoholic, abusive father. This is not the place, nor the circumstances, you would expect one of the brightest young minds of the time to emerge. But Ben has an insatiable curiosity from a very young age to know everything there is to know about the world. With the help of Rachel Winston, the benevolent daughter of the man who owns the farm the Evan’s family lives on as sharecroppers, Ben finds a way to educate himself. He gains access to Rachel’s text books, as well as her fathers extensive private library. When a series of events cause Ben and his best friend Tom Martin to move to Atlanta to find work, Ben gets the opportunity to take the entrance exam at Morehouse College, one of the most prestigious black colleges in the country. At fourteen years old, he scores higher that anyone who has ever taken the exam.

After finishing his bachelors degree in record time, he is then awarded a scholarship to Harvard for his post-graduate studies.

Less than a year from receiving his doctorate in physics from Harvard, he is charged with murder by a bigoted district attorney with a vendetta. Ben’s genius comes out again in the courtroom as he defends himself and is exonerated of all charges. Desperately needing money before returning to his studies, he and his best friend Tom take a construction job on a new government project in Oak Ridge, Tennessee. None of the workers know at the time that they are working on the Manhattan Project. Ben’s genius is soon discovered, despite the color of his skin, and he goes from a construction crew to working with the scientists and engineers, where he makes many valuable contributions and solves many problems before they arise in the race to beat the Nazis to an atomic bomb. But his genius as a scientist is not Ben’s only contribution. With the help of Tom, he thwarts the efforts of a ring of spies inside the Oak Ridge compound.

As the author explains, Ben Evans is inspiration to all of humanity.

“This story shows how rugged individualism can overcome the worst possible problems and circumstances if one has the tenacity and the desire to excel to the point that they become irreplaceable. It gives hope to those who are concerned about the racial divide that seems to be plaguing our country. Ben proves that there is hope for everyone – especially in this modern age when society has moved forward in leaps and bounds,” says Malone.

Continuing, “It proves the power of showing no ill will towards people, not becoming a victim and always remaining optimistic. It’s a message that is vital to today’s society.”

Since its release, the book has garnered a string of rave reviews. For example, Hannah Weatherford commented, “This is a definite page-turner. It is easy to form an attachment to the endearing lead characters, Ben, Tom, and Rachel, and I found it hard to put the book down, for fear I would surely miss something. The social stigmas of this era are well-researched and blended perfectly with the plot. Personally, Ben is my favorite. I would love to read more about him.”

About David Malone
I grew up and have lived my whole life in rural Alabama. Story telling was as much a part of daily activities as chores on the farm and sitting down to supper. I heard stories from such an eclectic cast of characters in my formative years, that I couldn't help but absorb some of these skills. I waited until rigor mortis had almost set in to decide to actually try and get something published. Now, writing consumes most of my daily thought. I still and always will. I live within 5 miles of where I was born, with my wife, Detha, a first grade teacher (the real hero of the family) and my 22 year old son, Jacob, who apparently has no designs on ever running away from home. I have a daughter, Mara, who thankfully is married to a great guy. 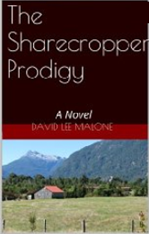