The Siege of Walter Parks - It Has Been Called "the Greatest Debut-Novel This Author Has Ever Written"...

Colin Robertson’s first work of fiction is satire in the tradition of Kurt Vonnegut and Douglas Adams. It is the story of one man’s stand for his family and against foreclosure by, literally, turning his home into his castle.

Santa Monica, CA -- (SBWIRE) -- 12/21/2012 -- The Siege of Walter Parks is a humorous look at how Americans today feel less and less in control of their own lives in a world where the American Dream seems more like a relic of a bygone era.

Walter Parks's life has fallen apart. Until a few days ago, he had it all - a beautiful wife, baby-girl, home in the suburbs and a not-so-beautiful, but reasonably well-paid job as a pencil-pusher at a pen company. Then Walter learned how quickly "having it all" can turn into "losing it all". So, when the bank decided to foreclose on his home, Walter Parks decided to simply say "no". Well, say "no" and turn his home into a fortified castle not seen since the days codpieces were considered sensible outerwear.

Thus begins the ever-escalating war that is, the Siege of Walter Parks. In this post-modern comedy of errors, some grammatical, one man shows that an act of short-sighted idiocy may be the only reasonable response to an irrational world.

As the author explains, his book covers a myriad of modern-day issues.

“It deals with social issues ranging from healthcare to housing, as a very average man, Walter Parks, finds himself in an unwilling war to protect his family from the world,” says Robertson.

He continues, “It's above all, prescient to the struggle so many Americans face in a world where they seem to have less and less control of their own destiny. Above all, it’s a story about survival.”

“This is the first book of fiction I've read about the housing crisis / Wall Street madness etc. I'm sure there's been others, but what I loved about this is it's both funny and often sweet at the same time. It does remind me of Stanley Kubrick's Dr. Strangelove or: How I Learned to Stop Worrying and Love the Bomb (if it had been set in suburbia). In some ways it's almost fairy-tale light in places (read: not very realistic) but it's obviously not intended to be. So, not for you if you want serious realism / drama. But definitely for you if you want clever satire, or at least some silly fun,” says one reader, who reviewed the book on Amazon.

Robertson is adamant that, while fiction, his book isn’t that far from present-day life.

“Yes, the book takes a humorous look at the housing crisis and, yes, the story is over-the-top, but you don’t have to have lost your home to feel like there are massive shadowy machine cogs running in the background, and if you have lost your home, well then, you know there are.” he concludes.

‘The Siege of Walter Parks’ is published by Amazon Digital Services, Barnes & Noble, and Kobo, all through: http://www.thesiegeofwalterparks.com

About the Author: Colin Robertson
Colin Robertson was born in Toronto, Canada in 1969. He is the author of several short stories and optioned screenplays and currently lives with his wife, son, daughter and dog in Santa Monica, California. 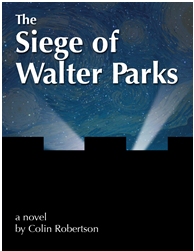