As the first book in the Alan Quinn and the Second Lifes series, ‘The Silhouette’ chronicles one tireless young man as he searches for his missing Father. Boasting a compelling supernatural discovery, the book is set to resonate with readers around the world.

Birmingham, AL -- (SBWIRE) -- 03/06/2013 -- For most new authors, their first release is merely an opportunity to test the literary waters. However, for Alabama’s Thomas William Shaw, his first foray into the world fiction boasts a bold narrative that rivals many global authors.

‘The Silhouette’ demonstrates the true power of love, hope and the supernatural.

As far back as Alan Quinn can remember, his family has been on the move. It isn't until they find a house in Ashton, Kansas when Alan feels he can finally call a place home.

Three weeks later, his father disappears, leaving him alone to be raised by his mother who quickly gives up on the search for her missing husband. Distraught, Young Alan Quinn takes it upon himself to take things into his own hands. On the search, he meets local friends, the LeCarre's, a new dog, Peaches, and a mysterious new ally named Darius who appears to know more than he leads on.

Together, they bring Alan closer to the answers he seeks and awakens a species his father only described in the stories Alan grew up hearing: The Silhouettes.

As the author explains, even though it’s his debut book, an overwhelming response has been achieved.

“Many people are already enjoying the book so much that they are telling others to buy it. This kind of traction, without any formal marketing, is every authors dream,” says Shaw.

He continues, “I’m not hoping that as many people as possible will find out about it. I work solidly at creating gripping fiction and I’m confident that there’s a huge market out there for this kind of writing.”

Critics praise Shaw for the diligent efforts he has taken to produce a potential best-seller. Due to such a positive response, the author has recently announced that his second book is in the works.

“It is the start of a new series, with book two coming next Winter. I can’t say too much about it yet, but all I will reveal is that the best is definitely yet to come,” he adds.

With the book’s popularity increasing, interested readers are urged to purchase their copy as soon as possible.

‘The Silhouette’ is available now: http://amzn.to/VQAVGD

A passion for writing was sparked in me as young as eleven-years-old. That was when I wrote my first short story about my elementary school staff turning into aliens. It was terrifying and the class loved it, excluding my teacher who sent me to the principle's office but recommended me for the Young Author's Conference in the same breath. Since then, I've had short stories published in local community college literary journals and worked in a bookstore surrounded by novels that told me I had to go full length. 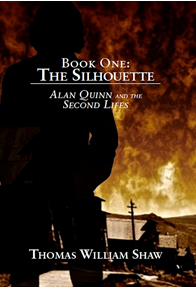