The Slurpee Chronicles: Author K.D. Wilson Lowers the Veil on Homosexuality and Down Low Men in Inspirational New Book.

Told through the eyes of a young homosexual male, The Slurpee Chronicles proves that through tolerance and truth, anything is possible.

Dallas, TX -- (SBWIRE) -- 09/28/2012 -- Using hard-hitting literature to tackle some of life’s biggest controversies, writer K.D. Wilson is delighted to announce the launch of his latest book, ‘The Slurpee Chronicles: Giving You the Tea’.

The Slurpee Chronicles: Giving You The Tea is a timeless story of acceptance and love within the LGBT community. Told through the eyes of La’Darious (LD), a young homosexual male, author K.D. Wilson lowers the veil on such controversial issues as homophobia, sexually transmitted diseases, and the underground world of down low men. It’s a roller coaster ride through one man’s experience of learning to understand himself and the life he was given.

This is a story that transcends sexual preference, race, and gender to remind us all that through tolerance and truth, anything is possible.

In Wilson’s latest installment, LD is struggling with being raised in a poverty stricken urban community, by a single mother who is uneducated, government aid dependent, and addicted to drugs; all while he is attempting to figure out his sexual orientation and his unwavering attraction to members of the same sex.

Throughout The Slurpee Chronicles: Giving You The Tea, LD goes through a range of emotions and extremely vivid/descriptive sexual encounters, hoping to eventually find someone that can give him the one thing his parents haven't been able to, love.

As the author explains, the book serves an important dual purpose.

“The Slurpee Chronicles is entertaining as well as informative. It sheds light on the underground world of down low men in the urban communities throughout the globe. It highlights the excitement, as well as the dangers that homosexual men encounter while being involved with members of the same sex, who are not public about their sexual desires,” says Wilson, a United States Navy veteran.

He continues, “It also highlights the health concerns that many women throughout these communities face from being intimate with men who are on the down low unbeknownst to them.”

Since its release, the book has received a consistent string of five-star reviews.

“I began reading this book and literally put everything aside until it was complete,” says Melissa M, reviewing the book for Amazon.

Another reader, K.T. Jordan, was equally as impressed.

“This book was a definite hit, I loved it! Just as I'd attempt to put it down, there came that good old "tea" again. Great price for some great reading!”.

With so much success on his hands, fans of Wilson’s work await the next installment of ‘The Chronicles’ with baited breath.

Until then, The Slurpee Chronicles: Giving You the Tea, published by CreateSpace, is available for purchase from Amazon.com.

Further information can also be found on Twitter: http://www.twitter.com/theauthorkd

About the Author: K. D. Wilson
K. D. Wilson is currently pursuing his bachelor’s degree from Southern Methodist University in Dallas, Texas. He is a United States Navy Veteran with a combined total of nine years serving his beloved country. K.D. has also spent one year in Iraq serving in Operation Iraqi Freedom.

His first book, The Slurpee Chronicles: Giving You The Tea, was self-published in April 2012.

K.D. Wilson grew up and currently lives in Dallas, Texas. He is the host of Tuesday Night Tea, a weekly Tuesday night discussion panel that highlights issues relating to sex, and relationships. In his spare time, you can find K.D. reading, playing with his dog, or writing manuscripts for the next installment of The Slurpee Chronicles series. 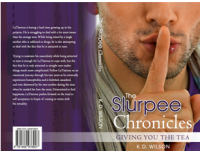