The Story of Alonzo Herndon: Compelling New Children's Book Proves That Even Slaves Can Become Millionaires

Written by Adam Herndon and based on the life of his Great, Great Uncle, ‘The Story of Alonzo Herndon’ is a tale of overcoming life’s odds and achieving overwhelming success. Imparting valuable life lessons including the importance of hard work, racial equality and honest character, the book is expected to resonate with young readers around the world.

Atlanta, GA -- (SBWIRE) -- 08/14/2013 -- Alonzo wasn’t your average slave. After being born into a farming community in 1858, he rose to become a prominent barber, entrepreneur and eventually the Founder and President of the Atlanta Life Insurance Company – one of the most successful black-owned businesses in the nation. To share his Great, Great Uncle’s story with the younger generation and empower them to overcome their own personal odds, Adam is delighted to announce the launch of his powerful new children’s book.

Synopsis of ‘The Story of Alonzo Herndon: Who Says A Slave Can't Be a Millionaire?’:

How on earth can a slave become a millionaire? The Story of Alonzo Herndon is a true, inspiring story about a boy who was born into slavery and worked very hard to become very successful. He even became a millionaire! Alonzo's story of determination and hard work will inspire both children and adults.

Alonzo Herndon's success is greatly admired, but many overlook how he overcame such harsh conditions to achieve his success. He was an entrepreneur even in his early years when he sold peanuts. He later attained wealth from barbering, real estate and insurance. Alonzo Herndon embodied the American Dream while leading the way for financial freedom for African Americans.

As the author explains, his relative is an inspiration to the entire nation.

Continuing, “I want this story to serve as an example for all young people growing up today. Even the privileged face a unique set of struggles and this real-life story proves that nothing is impossible.”

Critics praise the author for his diligent attempts to help change the lives of others.

“Through my own hard work, I am confident that I can make this book a huge success – just like Uncle Alonzo – who was so dedicated to his craft that he achieved top-level success. At the time, this level of notoriety among an African American family was virtually unheard of,” Herndon adds.

‘The Story of Alonzo Herndon: Who Says A Slave Can't Be a Millionaire?’, published by CreateSpace, is available now: http://www.createspace.com/4113601 and http://amzn.to/17Jz48n

For a biography of Alonzo Herndon, visit: http://bit.ly/1650GXs

About Adam Herndon
Adam Herndon spent his childhood in Oakland, CA and currently is an insurance agent and business owner in Laurel, MD. He is the great, great nephew of Alonzo Herndon and current Board of Trustee Member of The Alonzo F. Herndon Foundation. He has served as Chairman of the Board at University Community Academy, featured on Fox 5 Good Day Atlanta and highlighted in Atlanta Tribune, The Magazine for contributions to the community. Adam is a graduate of The Ohio State University and enjoys sports and helping others. He is married to Chandra and has two children, Chase and Jalen. 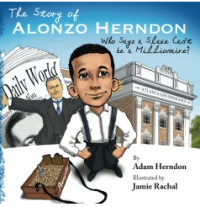