The THERAPY-IV, a Miami Beach Deep Sea Fishing charter, has announced that its 10 percent discount on fishing trips will end in only 10 days, by December 24th.

The highly rated fishing charter is offering this deal in an effort to provide clients with a gift idea for the holiday season. December is also a notably opportune month for fishing, as both the climate and water conditions are well suited for deep sea fishing excursions.

In light of the award-winning company’s popularity on TripAdvisor, this deal is expected to be widely sought-after. As typical of all its services, the THERAPY-IV – comprised of two 58-foot sportsfishing boats – formally welcomes novice and experienced anglers alike, and explicitly accommodates the needs of its clients.

Each boat is fully equipped to catch variety of fish, with such features as a tall tuna tower for spotting big game, large outriggers for spacing baits apart, a large flying bridge with a captain’s chair and two fighting chairs. The fishing cockpit is outfitted with four fighting chairs, two giant live bait tanks, and a giant transom door that can accommodate catches as large as marlin, shark, or dolphin.

About THERAPY-IV
Founded by veteran boater and fisherman Captain Stan Saffan in 1966, the venerable charter company has been a reputable staple in the region, and remains one of the oldest-operating independent businesses in Miami Beach. The THERAPY-IV has a long history of community involvement, sponsoring or participating in several local events, namely those occurring near its headquarters at Big Bill Marina in Haulover Park.

Indeed, the reputable fishing charter has consistently been ranked as the #1 activity in Miami Beach by TripAdvisor, a major travel website, and has received the coveted Certificate of Excellence for several consecutive years (most recently in 2013). Reviews and testimonials by clients denote overwhelming praise for The Therapy-IV’s courtesy, professionalism, and attentiveness towards clients. 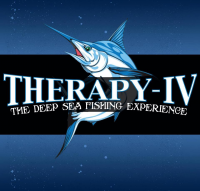