Taking readers on a captivating journey to save the human race from enslavement, Scott M. Sullivan’s new novel is poised to take the fiction world by storm.

Danbury, CT -- (SBWIRE) -- 08/09/2012 -- In the world of fiction, anything is possible. However, in the dark and unpredictable world created by author Scott M. Sullivan, a world that parallels our own, man’s finest hour is about to come to fictional fruition.

The Trinity Signs is a compelling story about evil’s attempt to overrule the authority of man. When humanity nears its tipping point, leaning more bad than good, the darkest form of evil has everything it needs to conquer the human race. Only by activating the Trinity Signs can certain doom be avoided. It is a task that rests on one man’s weary shoulders.

Official synopsis
“Once every one-thousand years, feeding off mankind's ingrained negativity, the darkest form of evil unleashes its fury in an attempt to rule all within its reach. There are those, however, that have prevented such an occurrence from ever happening. Over the years, these men have used the only tools available to them, the Trinity Signs, to stop evil from seeping through the cracks of life and enslaving an unknowing human race.

Tobias Ramsey is the last of his kind, a Guardian, and a reluctant hero thrust into his life by virtue of bloodline. He is the only man capable of seeing this epic quest through to fruition, or he will die trying. His journey will circle the globe and unlock the true meaning behind some of life's most perplexing mysteries. In a race against time, Tobias must guide the last of a sacred Brotherhood to find and activate the fabled Trinity Signs before all is lost.”

Fusing action, adventure and horror with the classic undertones of contemporary fantasy, The Trinity Signs is poised to become one of 2012’s most epic releases. As the author explains, the book provides the perfect escape from real life.

“The Trinity Signs is an escape from our world, from the reality overload we’ve all been thrust into. The Trinity Signs takes the reader on a journey away from the norm. It should be a simple treat for anyone looking for a fast paced tale about humanity's most important stand against evil,” Sullivan explains.

Continuing, “The story does not take itself too seriously, instead allowing the reader to immerse themselves in a world we all know and understand, but one with a reluctant champion fighting for our continued existence.”

Since its release in June, the book has garnered consistent five-star reviews.

“I was really into this book. The author does a great job of setting the scene; I felt like I was there are times with the descriptions. The characters were conceived well and believable. Some parts of the story require the reader to suspend their disbelief, but after reading the first chapter it was obvious that was going to be necessary,” says J. O’Reilly, reviewing the book on Amazon.com.

Another reader, John Taylor, was equally as impressed.

“The imagination of this author is amazing! This book takes you on an amazing adventure. You cannot put it down until you find out what is going to happen next!” he said.

The Trinity Signs, published by Sullivan Publishing, is available now from Amazon.com and Barnes & Noble in electronic format.

More information can be found on the book’s official website: http://www.thetrinitysigns.com. Its progress can also be followed on Twitter.

About the Author:
Scott currently resides in Connecticut with his wife and two children. 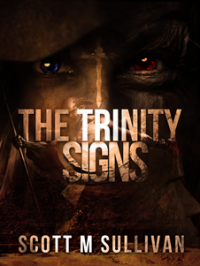