Established in 1987 by Brian Booth and the Oregon Institute in 1993, and presented annually by Literary Arts, Inc, the Oregon Book Awards was founded to honor the state's finest accomplishments by Oregon writers who work in the genres of poetry, fiction, drama, literary nonfiction, and literature for young readers. Awarded for literary excellence, winners are selected based solely on literary merit of submitted works by out-of-state judges. Following critical praise by bestselling authors Leslie Schwartz and Bonnie ZoBell, Gail Chehab's THE TUNNEL was entered into the 'Best Fiction' category of the Oregon Book Awards 2016.

Set in the dying days of the Middle East Old Order, just before the revolutionary events of the 'Arab Spring', THE TUNNEL takes the reader on a remarkable journey into the life of Omar Hamdan, a Palestinian and doting family man. Skirting the Israeli-imposed embargo in the Occupied Territories, Omar transports black market goods from Egypt to Gaza through his tunnel. However, complications arise for Omar and his family when his daughter, Hanan, is diagnosed with leukemia. Hanan is in urgent need of a bone marrow transplant, but treatment is impossible in Gaza. Refusing to give up hope, Omar, his daughter and family travel back and forth through 'the tunnel' for treatment in Egypt. Yet, each time they do so, they run the risk of getting caught. And time for Omar and his family is fast running out…

PRAISE FOR GAIL CHEHAB'S 'THE TUNNEL':

"Gail Chehab's stellar new novel The Tunnel transports you to the Gaza Strip right before the Arab spring where the Hamden's live and have a daughter diagnosed with leukemia. She can't get the medical care she needs without being smuggled into Egypt. The sensory details are so excellent you may find yourself ducking for cover or waving to keep the smoke out of your eyes…A Page Turner!"

Bonnie ZoBell - Author of 'What Happened Here' (Next Generation Indie Book Awards winner) and 'The Whack-Job Girls'. Also recipient of an NEA Fellowship, a PEN Syndicated Fiction Award and the Capricorn Novel Award.

"THE TUNNEL is the story of an ordinary family struggling with the potentially fatal illness of a child in an extraordinary time. On the eve of the Arab Spring and during a revolt between Israel and the occupied territories, a smuggling tunnel becomes the symbolic conduit between more than simply life and death…This beautifully written book demonstrates the unbreakable bonds of family even as it must suffer through the indignities of war. Chehab's voice is clear and lyrical. Her storytelling remains solid and balanced throughout as she depicts how the human spirit, fuelled by love and determination, can triumph over the devastating effects of war and politics. A courageous and timeless story."

THE TUNNEL has previously been awarded Second Place in the Roanoke Review's Annual Fiction Contest and was a Top Finalist for the Arthur Edelstein Prize. THE TUNNEL was also a Semi-Finalist for the William Faulkner-William Wisdom Competition, Salem College's International Literary Awards, and for The Ruth Hindman Foundation and the University of Alabama. In addition, the Summer Literary Seminars in Lithuania and Kenya awarded Gail a fellowship for THE TUNNEL. To learn more about Gail Chehab and THE TUNNEL, click here http://www.mediaaria-cdm.com/gail-chehab/

To view the official book trailer for Gail Chehab's THE TUNNEL and share with friends, click here https://www.youtube.com/watch?t=2&v=QwmbfMwpMrI

About The Tunnel
THE TUNNEL is OUT NOW on general release and available from online booksellers worldwide, as well as by order from high street bookstores. 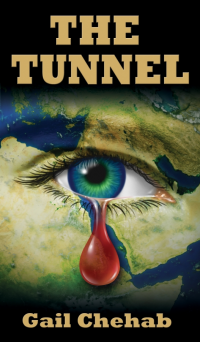