Masterfully written by author Clyde David Jones, ‘The Unlikely Bigamist: The Riley Francis Scott Story’ tells the fictional coming-of-age tale of a young man who finds life’s big decisions are always made by others. However, after a transformative life change that saw him leave his job, his relationship and even his own name behind, happiness takes on an entirely new meaning…

Hazel Crest, IL -- (SBWIRE) -- 05/06/2014 -- While everyone likes to think they have autonomy, many of life’s boldest decisions are often made by or for other people. In his powerful and thought-provoking new novel, author Clyde David Jones explores the far-extreme of this concept with vivid aplomb.

‘The Unlikely Bigamist: The Riley Francis Scott Story’ is an uplifting coming-of-age story like none other, telling the story of Scott, an unassuming young boy who finds many of life’s decisions are made out of his hands. After reluctantly marrying and living a life he wouldn’t have independently chosen, Jones introduces a stark shift in circumstance from which all readers can learn about their own lives.

Synopsis:
“Benton sat in his office many days reflecting back over the events of the past that had brought things to where they were now. He even questioned himself as to whether he was wrong in not returning to a relationship and life that he was positively sure that he did not want. He found himself faced with the ultimate question of whether a person should stay committed to a relationship just to be honorable and in line with the conscience of tradition and popular opinion. Or perhaps, just maybe, it was better to make unpopular decisions if in the long haul you could find the happiness that you knew your heart was truly searching for. After searching his conscience and his heart, Benton concluded that he had made the right decisions. He was sure that he had found a bond of love with his Joanna that could not have been matched by any other choice that he could have possibly made. He had found true happiness and that was in his estimation priceless” (Page 180, paragraph 3).

This story “The Unlikely Bigamist” is one of the most exciting books that you may ever read. The author perfectly captures the many emotions and touching inner feelings of the characters in a magical way in presenting this great novel. As you read “The Unlikely Bigamist, you the reader will ultimately find yourself wondering how would your life have been if you had made some different choices. For better or worse, we all at times have had some past experiences which leave us curious as to what could or would have been if…! Our main character Benton Alexander likewise was facing tough decisions that would ultimately determine his future. Benton chose to make his decisions by placing his future happiness as his top priority. After encountering his personal moratorium during his military tenure, Benton realized that he could no longer allow others to rubber stamp decisions for him. Benton accepted the challenge and made a life changing decision that would alter his life forever. Whether the readers agree or disagree with Benton’s brand of newly found maturity, you will enjoy reading about his self-determination and courage in his search and pursuit of finding his ultimate happiness.

“The main theme running throughout my narrative is that of choice; something we seldom think of, but a force that drives our ultimate outcome in life,” says Jones. “It presents the dilemma of – should you remain unhappy just because you’ve made a traditional commitment to someone or something, or should you break these reluctant ties and pursue the life you’ve always dreamed of?”

Continuing, “It certainly offers a different perspective on things and will leave each reader with plenty to think about. Who knows, some of them may also decide to make the same change as my protagonist…..”

Since its release, the novel has garnered rave reviews. For example, one reader comments, “I started reading this book a couple of days back and it is so engaging that I had to finish it right away. I don't want to spoil it for anyone so you will have to read it to find out why. Anyway, in the back of the book Mr. Jones mentions that he would like to have one of his books made into a movie and I feel this one has a strong basis for it. Keep them coming Mr. Jones!”

About the Author
Th author lives in Illinois. 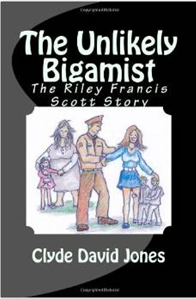