In a unique fusion of fact and fiction, Emby Press have already garnered a huge global following for their unlikely yet gripping ‘hero’. While numerous anthology appearances exist, ‘The Whitechapel Demon’ is the Royal Occultist’s first full-length novel. Can his dark prowess keep arcane threats truly at bay?

Atlanta, GA -- (SBWIRE) -- 01/06/2014 -- From ‘Spiderman’ to ‘Fifty Shades’, many smash-hit literary releases use their early grassroots notoriety as a springboard to best-seller success. Having spent many years as a niche yet globally-celebrated character, the Royal Occultist created by Josh Reynolds could well be the ‘next big thing’ as 2014 rings in.

Through numerous anthologies that have captured a vast audience, Reynolds is finally taking his character into the mainstream through the release of ‘The Whitechapel Demon’. For those who are unfamiliar with the title of the ‘Royal Occultist’, the novel offers the perfect introduction to what could be literature’s most intriguing character yet.

John Dee was the first.

Formed during the reign of Elizabeth I, the post of the Royal Occultist was created to safeguard the British Empire against threats occult, otherworldly, infernal and divine.

It is now 1920, and the title and offices have fallen to Charles St. Cyprian. Accompanied by his apprentice Ebe Gallowglass, they defend the battered empire from the forces of darkness.

In the wake of a séance gone wrong, a monstrous killer is summoned from the depths of nightmare by a deadly murder-cult. The entity hunts its prey with inhuman tenacity even as its worshippers stop at nothing to bring the entity into its full power…

It’s up to St. Cyprian and Gallowglass to stop the bloodthirsty horror before another notch is added to its gory tally, but will they instead become the next victims of the horror guised as London’s most famous killer?

In the tradition of William Hope Hodgson's Carnacki the Ghost-Finder, Josh Reynolds presents the Adventures of the Royal Occultist. Join Charles St. Cyprian and Ebe Gallowglass as they race to halt the workings of the sinister secret society and put an end to the monstrous manifestation in THE WHITECHAPEL DEMON!"

Published by Emby Press, a new press specializing in horror and supernatural fiction, The Whitechapel Demon is the first full-length novel featuring the Royal Occultist from popular author Josh Reynolds.

The author hopes St. Cyprian will bring fresh new blood to the world of fiction.

“Imagine a crossover between Sherlock Holmes, James Bond and Harry Dresden – that’s the best way I can describe him. He isn’t a character you’ll forget anytime soon and is the perfect literary companion for fans of pulp, ghost stories and mysteries,” says Reynolds.

Mellissa Buettner was equally as impressed, adding, “I really enjoyed my introduction to St. Cyprian and found the story thoroughly entertaining. It was dark and witty and the interaction between the leads made me laugh out loud a number of times. No spoilers, but I found what was going on was extremely clever and not simplistic at all.”

About the Author: Joshua M. Reynolds
Joshua M. Reynolds is a freelance writer of moderate skill and exceptional confidence. He has written quite a bit, and some of it was even published. For money. By real people. 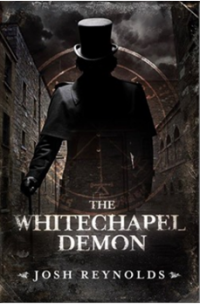