The Noble Liars have released their fourth album, Four, and their track “Hammer Without a Nail,” is featured on WiFi PR Group's Indie Anthems Vol. 3.

Las Vegas, NV -- (SBWIRE) -- 01/13/2014 -- After seven years of hard work and tenacious effort, The Noble Liars have released their fourth and aptly titled album, Four (2013). Their summer release has already generated a buzz and more performances, leading up to their CD Release party at Vangeli’s this November.

This Saskatoon rock-meets-folk/country trio has performed in spurts over the years but now comes together strong with this latest effort, a solid and pleasing result of their combined years of talent. On this album you’ll hear hints of their musical inspirations, such as Bob Dylan, Neil Young, Pearl Jam, Tragically Hip and Blue Rodeo. In terms of overall sound, they are most often compared to the latter two influences as well as to The Decemberists.

The Noble Liars feature Davin Burlingham on guitar and vocals, Mike Nicholaichuk on bass, guitar and vocals and Kurt Touet on drums. They also frequently collaborate with guitarist and singer/songwriter Sayde Black on both writing and
performing their songs.

Formed in 2006, The Noble Liars first performed as Jasper Ave, and their very first gig was opening for April Wine. Despite having full-time day jobs—Davin is a lawyer, Mike is a mechanical engineer and Kurt is a mechanical technician—they still find time to do what they love: write, record and perform music to entice their fans and fulfill their own artistic passion. If anything, establishing such a work-life balance benefits their music by demonstrating just how dedicated and hard-working they are to everything they put their minds to, all of which has led up to their latest release, Four.

In July 2013, The Noble Liars released their fourth and latest recording effort, Four, for which they had the opportunity to record with both Sayde Black and Veronique Poulin, both locals artists in Saskatoon.

Four is 14 tracks of polished rhythmic rock with subtle leanings toward the authenticity of country and folk. Off the new album, “Hammer Without a Nail,” will be featured on the upcoming release of Indie Anthems Vol. 3 from WiFi PR Group. The song’s chorus has a sense of confusion and frustration but is relayed in a pleasingly melodic and catchy, fun-to-sing-along way: “It’s all good / Got it under control / So why am I feeling low / Like a hammer without a nail?” The signature melody in the intro pops up a few times throughout the song and breaks up the melancholy with a lick of smooth but hard-hitting notes that gives an extra pop to the song’s otherwise simplistic, straightforward guitar line.

The trio released three albums preceding Four, including The First Dance (2006), Music at Christmas (2006) and The Noble Liars (2011). For their debut album, Davin had spent six months writing the last half of it while in St. Petersburg, Russia. Upon coming back together, the group finished that first album as well as their next, Music at Christmas, in the summer of 2006 back home in Saskatoon, even though Davin was living in Vancouver at the time. This goes to show just how determined this band has been to stay together and finally arrive at this shining moment: the release of Four.

In promotion for their new album, The Noble Liars will throw a Four CD Release party on Saturday, Nov. 9th at Vangeli’s Tavern in Saskatoon.

You can download tracks and the full album, Four, as well as their self-titled album on iTunes. 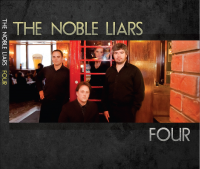