While Francesco ‘Cheech’ Caruso dominated the headlines in the 1920s after killing a Doctor the same day his son died, a new biography of his life exposes the tragedy and adversity that few know he endured. Compiled by Cheech’s son, Dominic Caruso, ‘This Bitter Earth’ offers compelling glimpse into Italian-American immigration and the early formation of the Mafia.

California, MD -- (SBWIRE) -- 01/14/2014 -- In February 1927, Dominic Cheech Caruso transitioned from ‘just another’ Italian immigrant in New York to the creator of national news after slashing the throat of a young doctor who had been caring for his just-deceased son. While branded as a mobster by the media, Caruso’s tragic life story offers a fascinating glimpse into the struggles thousands of Sicilians faced after giving up all they knew to start a new life in the United States.

Cheech’s compelling story is made public for the first time in ‘This Bitter Earth’, a biography written by his son, Dominic. However, this is far more than just the release of a book, it’s the realization of a promise Dominic made to his father in 1959 – that he’d write his life story and expose the real man behind the crime.

This is the tragic tale of a young man, the story of my father Francesco Cheech Caruso and his native country of Sicily. As the youngest of seven sons born to Pasqualina and Joseph Caruso of Caltagirone Sicily, the burden of managing the family business and farm fell to him over the protest of his older brothers.

The chain of events that led him as a young man to leave all he knew to seek a new life in a country that he knew nothing about are compelling and life altering. The decision he made would always be regretted and never be reversed. He could never go home. No one can.

The author explains, he and his father did not have a father-son relationship until 1949 when his father asked him to write his life story. A story that is as sad as it is fascinating.

“By the eighth grade my father was getting ready to leave school and start training to take over the family’s prosperous Sicily furniture and cheese making business. He literally had it made, despite the protests of his older brothers. Of course, everything was then suddenly ripped away from him as he was whisked over to New York against his will,” says Dominic Caruso.

Continuing, “The Italian culture he found in America was a million miles from that of back home. My grandfather allowed him to be counseled by a wealthy Mafia boss – a big mistake. This entire story is showcased in full, along with a heart-wrenching story about a love interest that never flourished as it should have.”

Cindy writes: “I lived in Cheech Caruso's world for a short time as I was editing this book. It was fascinating - at times, heart-breaking. With this true story, the author takes us along on his father's journey from birth in Sicily to immigration to New York. In addition, I would recommend this book to those who are interested in the early formation of the Mafia.”

Dallas Martin was equally as complimentary, commenting: “Caruso's innovative book, "This Bitter Earth," is both interesting and informative about Sicily's fascinating past times. It is a must read for all interested in Italian-American literature, as well as a captivating coming-of-age story.”

About the author, in his own words:
My name is Dominic Caruso and at seventy-seven years old. I am the youngest and sole surviving son of Francesco ‘Cheech” and Maria Caruso. I am a songwriter, inventor and artist and have completed two years of commercial art and animation training at the Professional Institute of Commercial Art at Reistertown, Maryland.

In July of 2003, I completed the manuscript on “Only Yesterdays”, first released as “No More Tomorrows”. In late 2013 I completed my work on book number two, “This Bitter Earth”, which covers my father growing up at Sicily and eventually coming to America. There is a third book on my father’s early years at New York after entering Ellis Island. Both books are published by www.bookflurry.com.

I am also working on a TV series “Prohibition” that takes place in the roaring twenties 1920-29 at Red Hook Brooklyn, New York and follows my fathers foot steps and associations Until 1927 When the future changed for all members of the Caruso clan. 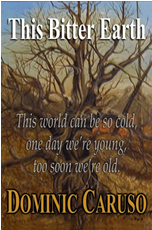