To promote the 19-hour epic fantasy audiobook Union of Renegades, the author Tracy Falbe is offering audiobook fans worldwide free access to the first three chapters of this gritty saga of romance, magic, and rebellion.

The first three chapters from the fantasy audiobook are free in mp3 format at Brave Luck Books. Union of Renegades begins The Rys Chronicles fantasy series when the hero Dreibrand Veta reaches the edge of his known world with the imperial army of his homeland. He longs to explore the wilderness before him and rebuild the fortune of his ruined family, but the empty land harbors a terrible past and is the gateway to a realm ruled by a queen of a magical race called the rys. Dreibrand becomes embroiled in a power struggle between rival rys while trying to rescue the children of his lover Miranda.

Union of Renegades presents a drama filled with numerous characters and cultures, including Shan the benevolent pretender to the rys throne, King Taischek and his nine wives, and Lord Kwan the hordemaster of the empire.

Falbe is a lifelong fan of fantasy fiction who fell in love with the genre by reading J.R.R. Tolkien, Michael Moorcock, Terry Brooks, and Robert E. Howard. She distinguishes her fiction by avoiding the cliché orphan teenager discovers his or her magic powers and is swept into a battle of good and evil. Her fiction although filled with magic, focuses on young adults trying to make their way in a world controlled by magical beings who are dangerously superior to them.

People intrigued by the free 3-chapter sample can acquire the complete Union of Renegades audiobook for only $8.95 at Brave Luck Books, or buy it at Audible or iTunes where it retails for over $20 except for Audible members who can use their membership to buy the audiobook.

“I’m able to offer a lower price at my website because I don’t have to give 75 percent to another retail company,” Falbe said who tries to offer competitive value on her ebooks, books, and audiobooks at her web store that serves a global audience.

She is the author of 9 fantasy novels. Union of Renegades is her first novel. For years she has given away the free ebook version of it to connect with readers, some of whom get hooked on her writing and buy the rest of the series.

For audiobook fans who enjoy Union of Renegades, the next book in the series The Goddess Queen: The Rys Chronicles Book II is also available as a 16-hour audiobook.

Falbe decided to expand her portfolio into the audiobook medium because it is a popular way for busy people to consume fiction.

“I know a lot of people don’t have the time to read big thick books, but they love to listen to them. Spoken word was the original form of storytelling way before literacy,” Falbe said. 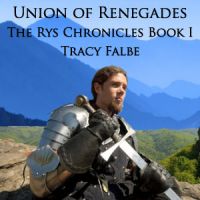