Released a time when women are finally permitted to fight on the front lines, Von Rashawn Coleman employs a strong female protagonist in a book he wrote for his Navy ‘brothers and sisters’.

San Diego, CA -- (SBWIRE) -- 02/07/2013 -- While most military novels call on a tireless man for their lead, Von Rashawn Coleman always knew that women were just as capable. With his book’s release coincidentally coming at a time when women have just been permitted to fight on the front lines, ‘Tic Online’ is an apt ode to women everywhere.

In fact, Coleman openly advertises the fact that he wrote the military science fiction novel to honor those with which he has served for almost two decades.

When US NAVYSPACE's newest flagship, the fold jump capable USS Galileo is captured by the hostile Azian Maou force The Keepers of Purity Army its successful return is placed on the shoulders of NAVYSPACE's youngest and brightest Commanding Officer Captain Carey Desaro.

Captain Desaro commands the last of the US NAVYSPACE's Canaveral class lightspeed capable carriers the USS Colin L Powell as well as an elite Group of specially trained sailors known as M.A.S.A.I. as they face insurmountable odds against a quickly advancing Azian Maou fleet, the vastly superior Galileo with her deadly array of advanced weaponry as well as the KPA's maniacal leader the Azian Maou terrorist known as Abu Hol.

The fate of Earth, Mars and the Azian homeworld hand in the balance as the aging Powell races against time to defeat the KPA.

As the author explains, his project is a personal thanks to the men and women who made his career both memorable and exciting.

“This story is important because it was written for all my Navy brothers and sisters who I've met during my Navy career,” says Coleman.

He continues, “It's a military science fiction story with strong female leads, which presents perfect timing now that women are finally allowed on the front lines.”

While at heart a work of science fiction, Coleman has also worked diligently to make his work enjoyable for more casual readers.

“I don't trouble the reader with head exploding warp bubble computations or faster than light calculations. It's written so the casual reader who normally wouldn't read sci fi can pick it up and enjoy it however it also has great technology and weapons for the hard core sci fi reader to enjoy,” he adds.

With the book already proving to be in high demand, critics urge interested readers to purchase their copy as soon as possible.

About the Author: Von R Coleman
San Francisco Bay Area native Von R Coleman was born the day after his parents saw Star Wars for the first time and he has been engrossed with science fiction for over 30 years.

TIC ONLINE is Von's first trek into the world of science fiction writing. An active duty Operations Specialist of over 17 years Von is currently finishing his final tour in San Diego, CA onboard the USS San Diego LPD-22. 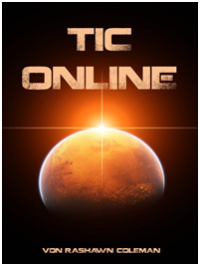