Las Vegas, NV -- (SBWIRE) -- 01/13/2014 -- With her hit video for her single “Free,” R&B vocalist and songwriter Tiffany Ponce has captured an audience of fans both new and die-hard with an alluring and familiar yet unique sound, resulting in thousands of views in just a short while. Tiffany calls Winnipeg, Manitoba home and has already built up a significant fan base throughout Canada and is sparking interest in the U.S. as well.

She has been compared to two of the musicians who inspire her vocal prowess, Janet Jackson and Aaliyah, as well as to Toni Braxton, Alicia Keys and Kelly Rowland. Her other influences have been Tamia and TLC, all of whom have helped her harness her smooth and soulful R&B sound.

Tiffany finds inspiration in a number of different sources, from love and loss to personal fulfillment and overcoming adversity. For example, the title track of her EP Only the Beginning (2012) is based on her own journey from a traditional university education and nursing job to the beginnings of the music career she always dreamed of. The final track on the EP, “Tell Me I Can’t” references a moment in which someone told her she didn’t have enough soul to sing R&B, and she instead used that for fuel to work even harder and become both a stronger singer and a stronger person in the end.

Her official YouTube video for “Free” has already garnered nearly 25,000 views in its first five weeks. The video’s premise is simple and beautiful, with different shots of Tiffany singing the track in stunning outdoor settings, including bridges, trees and a gazebo. The video animates the captivating song, which remains the focal point of the already popular and successful production.

“Free” can also be heard on Indie Anthems Vol. 3 from WiFi PR Group.

Another significant success for Tiffany was the release of her aptly titled EP, Only the Beginning, which resulted in two sold-out shows in her hometown Winnipeg and much praise from her adoring fans.

Tiffany is currently working on a track with Nashville-based songwriter Jeff Savage, who wrote and co-produced Grammy-nominated and award-winning songs for Toby Mac as well as songs for Jennifer McGill, a former Mouseketeer of the Mickey Mouse Club. This particularly sparked her interest in collaborating with Savage, as she has always been inspired by the show’s cast members. In the near future, she is planning to write and record her upcoming full-length album.

In the past, she has opened for such headlining artists as Bamboo (rock/pop artist from the Philippines), Moka Only (Canadian hip hop artist, formerly of Juno-winning group Swollen Members) and Akil the MC (American hip hop artist, formerly of alt hip hop group Jurassic 5). As she progresses in her music career, she is working to attain more shows with this high caliber of artists as well as plan her own tours for next summer with her newly formed band.

Her upcoming shows include a show with hip hop artists Blackboltt and Tragic (of hip hop group Philly Moves), from Toronto and Abstract Artform from Winnepeg on October 4th at 5 Fifty-Five in Winnipeg. She also performs another show with the same artists on Saturday 5th at Boulevard in Dauphin, Manitoba.

You can purchase her music at HMV Portage Place and Music Trader in Winnipeg or online from CD Baby, iTunes and Amazon. 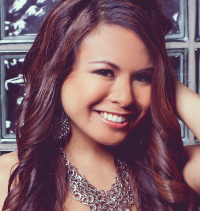