Tiger & the Rogues prepare their upcoming powerhouse of a rock ‘n’ roll track, “Troublemaker,” which is set to appear on WiFi PR Group’s Indie Anthems Vol. 5.

Las Vegas, NV -- (SBWIRE) -- 04/21/2014 -- Sydney’s own up-and-coming rock purveyors, Tiger & the Rogues, are busily working on a slew of new material, including their upcoming single, “Troublemaker,” which will be featured on WiFi PR Group’s upcoming compilation, Indie Anthems Vol. 5. For a true sense of rock ‘n’ roll with a woman’s touch, music lovers will find an enticing sound that lives and breathes the essence of the genre.

Tiger & the Rogues is comprised of five musicians who all bring their own talent and fresh perspectives to the table to create the band’s edgy sound: Lou Tiger O’Connor on lead vocals and rhythm guitar (also the lead songwriter), Amos Branch on lead guitar, Nathan Clinen on bass, Ed Pearson on drums and Monique Friedlander on backing vocals.

The band draws on a wealth of musical influences in the realm of rock ‘n’ roll, including the Rolling Stones and Creedence Clearwater Revival—to whom they’re often compared—as well as the Foo Fighters, Black Keys, The Doors, The Who and Black Rebel Motorcycle Club. They are also often compared to the Allman Brothers, Kings of Leon and Taylor Swift.

As the female lead songwriter, Lou tends to draw inspiration from her experiences as a woman in a predominately man’s world. A lot of the songs she composes are confident and strong with anthem-like qualities. She ultimately hopes to inspire other women who also dream of doing something in the music industry.

To share their distinct breed of rock with the world, Tiger & the Rogues released their debut self-published demo in August 2012. They’re currently in the process of recording, mixing and mastering more of their tracks, but they will release a single within the next two to three months.

As for notable accomplishments, several of Tiger & the Rogues’ songs have been shortlisted on many song awards lists, including but not limited to the MusicOz Awards, the Songs Alive Awards, the Australian Songwriters Association Awards and a handful of other international competitions. Frontwoman and songwriter Lou O’Connor has been a featured artist on the television show Songwriters Across Australia, and she will also be featured in an upcoming promotional campaign on the Country Music Channel.

At one of their most recent gigs, also one of the highlights of the group’s career, they not only played the launch night of a new venue, but they also opened for the Snowdroppers, a band that is gaining a lot of attention in Australia and has had a few of their songs featured on national TV programs. Tiger & the Rogues also enjoy reveling in the memory of playing the Enmore Theatre, one of Sydney’s larger venues, a few years ago, where three of the members played in an older iteration of the band.

Another great accomplishment will come when their track “Troublemaker” is featured on WiFi PR Group’s upcoming compilation, Indie Anthems Vol. 5, a collection of international independent talent that WiFi PR hopes to get on the radar of music lovers and industry movers and shakers the world over. Set to be released at Coachella this month, the digital mixtape will be handed out on 3,500 download cards to festival attendees, and 1,500 more copies will be made available on the Indie Anthems Bandcamp website.

If you’d like to experience Tiger & the Rogues live, check out their upcoming live performance at Easy Tiger at The Unicorn Hotel on June 6th.

As Tiger & the Rogues are still recording, mixing and mastering their tracks, they are not currently selling their music. But when these songs are released, they will be selling them on iTunes and selling physical copies at their live shows.

In the meantime, you can check out videos of their live performance from Notes in Newtown, Sydney, in October 2012, including the songs “Times Like These,” “Troublemaker” and “The Fairlanes,” on their YouTube channel. 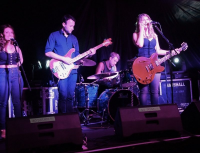