Tim Cook, the Apple CEO, Will Attend the Sun Valley Conference This Week

Tim Cook, the CEO of Apple, will attend the Sun Valley Conference 2013 this week. During the four days’ conference, Tim Cook is about to have some one-to-one meetings with the media bigwigs, and may reveal some latest news of the Apple technology.

Shenzhen, Guangdong -- (SBWIRE) -- 07/10/2013 -- Tim Cook, the CEO of Apple, is sure to attend the Allen & Company Sun Valley Conference 2013 this week along with Facebook Founder Mark Zuckerberg, Disney CEO Bob Iger, and Amazon CEO Jeff Bezos and so on. Apple has made a lot of movements on its Apple TV, will Cook unveil some latest news on this conference?

The Allen & Company Sun Valley Conference is a gathering of enterprises’ senior management officers and celebrities in finance. This conference was first held in 1988, and now it has been a great event for media, science & technology and investment. A lot of speeches and communicating forums will be held during the conference, so it is a good opportunity to get the latest news of the famous enterprises. The conference will last for 4 days and over 300 leaders of all kinds of fields will be invited.

This is the second time for Tim Cook to attend in the Sun Valley Conference. In 2012, he arranged several one-to-one meetings with some media bigwigs. In this Conference, people also expect the news from Tim Cook about the latest technology. Apple has made a lot of movements on its Apple TV, which was once regarded as an overlooked hobby product of Apple. But the release of HBO GO, WatchESPN on Apple TV and coming Time Warner Cable (TWC) show Apple’s desire of bring Apple TV to a new era. Days ago, Apple hired Hulu VP Pete Distad, who will play an important role in the security of new contents of the fruit company, also shows that Apple has made some new plans for the “hobby” product.

So whatever Tim Cook brings to this conference will be valuable, and the media reporters are ready to get all of the useful ideas. Tim Cook is probably not coming for the leisure activities like golf and fishing, but two years’ appearances on the conference makes him popular. The former CEO, Steve Jobs, was still being invited for 2010’s Sun Valley Conference, but his last appearance was at 2005. So Tim Cook’s appearances are without doubt to make the media exciting. Maybe the live streaming video technology on Apple TV will be mentioned, too, but people always want to watch the favorite movies more than once, therefore, transferring movies to iPad for enjoying without limits may be more attractive.

About Leawo Software
Leawo software established in 2007, is a professional multimedia solution provider, mainly specializes in processing and broadcasting media over the Internet as well as in the daily life. Our products range from DVD Converters, Video Converters, FLV Converters, PowerPoint Converters to Mac products including Mac FLV Converter, Mac DVD Converter, Mac Video Converter. The products are available worldwide in English, Japanese, German, French, Italian and Chinese, to be used on both Microsoft Windows and Apple's Mac OS X platforms. 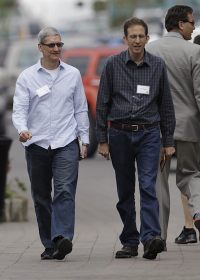