From opposition toward Ben Franklin’s lightning rod to the modern-day circus of abortion and stem cell research, Marvin Rubinstein’s new book offers a frankly honest insight into the battle between religion and science.

Annapolis, MD -- (SBWIRE) -- 08/14/2012 -- For Marvin Rubinstein, his question is clear; why does religion engage with and slow down scientific and medical progress? All is tackled in his new book, ‘To the Ramparts! Religion vs. Science – The Battle.’

The book points out many controversial issues over the centuries. It touches on subjects such as stem cell research, birth control, blood transfusions, Galileo Galilei's “Eppur si Mueve" and the dissection of human cadavers, just to name a few. In all, it highlights the stupidity, prejudices and the unwillingness for religion to listen to other opinions and be tolerant toward them.

“All of us know of the great benefits that sciences, including engineering and medicine, have afforded us. From refrigerators and cell phones to inoculation and birth control, the list goes on and on. Most, however, are not aware of the vitriolic battles that religion has waged against scientific developments for hundreds of years,” says Rubinstein.

He continues, “This book concentrates on the ignorance and stupidity of Priests, Ministers, Rabbis and Muslim Clerics (and their followers) in opposing scientific and medical progress.”

To give an example from the book; most people find it hard to believe that religious groups opposed the lightning rod when Ben Franklin discovered it. Churches, with their high spires, were actually the main victims of fires started by lightning, but the Churches waited more than 15 years before starting to install these simple, inexpensive protective devices.

“Stem cell research, with its tremendous possibilities for improved medical health, originated in the United States; but religious groups have stopped us from reaping the likely tremendous medical benefits, not to mention the huge financial rewards that pursuing this research could have provided,” adds Rubinstein, citing another example from his work.

The book is already garnering rave reviews, with many praising its honest yet unbiased analysis of the factual progression of science, coupled with the religious uproars that many innovations caused.
However, Rubinstein isn’t looking for praise. Instead, he makes it clear that the purpose of his book is to educate, inform and inspire.

“There is little likelihood that TO THE RAMPARTS! will convince fundamentalist Christians or deeply devout practitioners of other faiths to back off their anti-science attitudes, just as Galileo was never able to convince the Catholic hierarchy in the 17th Century that the Earth rotates around the Sun. However, I do sincerely hope that there are hundreds of thousands of reasonable readers with open minds that only require a little educational nudge,” he concludes.

To the Ramparts! Is available now from Bucket List Publishing.

About Bucket List Publishing
Bucket List Publishing is the vision of A.W. (Art) Field LPI, SC (Ret) of Sutton West, Ontario Canada. Art, or Artie as he is sometimes called by his friends, was inspired to create this unique publishing company as a result of desperately trying to get his first book published - Everything You Need To Know Before Your Knee/Hip Surgery.

Eva Kapitan of Annapolis, Maryland, U.S.A., a special friend of Artie's wife Anneke, is also an accomplished writer with a great deal of experience and knowledge of the publishing industry. Eva holds a Bachelor of Arts degree in French and English Literature from the University of Toronto. 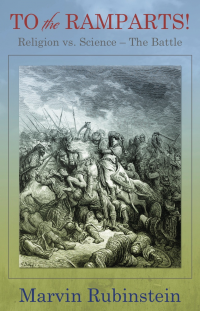