Bronxville, NY -- (SBWIRE) -- 03/19/2012 -- ID scanner solutions provider TokenWorks Inc. will be providing ID scanners for the 2012 Atlantic City Beer Festival taking place at the Atlantic City Convention Center in Atlantic City, New Jersey on March 30 and 31, 2012. This marks the fourth year that all event entrances will be equipped with TokenWorks ID card readers to quickly verify and document the age of the more than 20,000 attendees.

The Celebration of the Suds, commonly referred to as The Atlantic City Beer Festival, has been New Jersey’s spring kickoff event for the past seven years. With 750 beers from 90 individual breweries, dozens of music acts and thousands of event goers, fun is the order of the day, but so is age verification. Once again, TokenWorks Inc. has the event covered by providing all of the mobile ID Checker devices for each event entrance. “Age verification is imperative for the continued success of this festival, so we’re truly proud to help them carry on the tradition safely and securely via one of our drivers license scanner models,” said TokenWorks President Charles Cagliostro.

TokenWorks makes a full range of magnetic stripe and barcode card scanners for age verification. Just like every model made by the American company, the TokenWorks IDVisor Z22 Mobile ID scanner boasts a technologically advanced rugged design. The handheld unit is ideal for events where rapid ID checking is needed in multiple locations. “We’ve been using ID Scanners from TokenWorks for years and they’re not only simple for the staff to use, they are totally reliable and fast,” said Atlantic City Beer Festival Planner Anthony “Bert” Bertino.

TokenWorks ID readers are widely used at convenience and liquor stores, bars, nightclubs and large scale events across the U.S. and Canada. Their handheld ID checkers can read drivers’ licenses from all U.S. states and Canadian provinces as well as military IDs and state ID cards. “The ability to check IDs accurately and quickly is crucial to the survival of any establishment or event that has alcohol,” said Cagliostro. “Every TokenWorks ID scanner model boasts the best price and performance on the market, so event planners like Bert can rest assured that every ID is accurately checked and documented.”

About TokenWorks Inc.
Since 1998, TokenWorks has provided a full-range of magnetic stripe and barcode ID card scanners for age verification and lead capture to retailers, clubs and events in the U.S. and Canada. The ID checkers boast advanced features and flawless reading of drivers licenses from all U.S. states and Canadian provinces. The company’s reputation for reliability, simple operation and durable hardware has made them the leading provider of ID card reading solutions throughout the U.S. 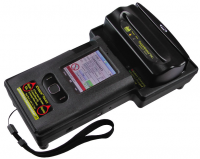