After a long and successful career in singer-songwriting, Tone Indbryn is releasing her latest album and booking tour dates.

Las Vegas, NV -- (SBWIRE) -- 01/13/2014 -- Vocalist, instrumentalist and songwriter Tone Indbryn is an accomplished folk artist with a 20-year history of solid recordings and performances under her belt and who has dedicated all of her soul and efforts to music, her true calling. While Tone may seem like a name chosen by a musician, it is this singer’s real name, given to her by her Norwegian parents—a name which just so happens to reflect an inescapable element of her personality. She is working tirelessly with her producer to record and release a full album this winter and tour her multimedia performance show.

To arrive where she is today, Tone has had a rich musical background, from her classical music influences from her Norwegian parents to her role as a feminist singer-songwriter and slam poet in East Vancouver. She has performed at many concerts, poetry events and festivals over the years while also going to school, raising her son alone and working another job. A move from Vancouver due to a bad relationship led her to meet her producer and musical cohort Phil Krawczuk.

Tone Indbryn is a versatile solo artist, playing mostly acoustic guitar and singing, but she is also a songwriter, lyricist and poet and plays a little piano as well. She also works closely with her producer and drummer Phil Krawczuk, but she occasionally has musicians come in, such as vocalist Carol Wiedemann and guitarist Craig McCaul.

Working with Krawczuk has particularly affected her music and songwriting, as he has taken her under his wing and brought a fresh and objective ear to her songs, which has helped her true self come through her music and musings.

One of her latest singles, “Razor Sales,” is a matter-of-fact part-spoken word, part-singing track about just that—selling razors, and all their different types and uses. She ends the song with, “Yes, I’m selling razors now. Music is for kids.” It reflects a humorous side of Tone wherein she can quite literally write about anythingand make it sound beautiful and intriguing while relating to her audience in a down-to-earth, light-hearted way.

“Crucify Me” has a very light-hearted way about it as well, but this time more in the musical aspect. Tone’s voice is strong at times and sweet and airy at others, a testament to her vocal range and ability. The song kicks off with soft percussion in the form of some quiet bongos and a constant click-clacking of what sounds like a woodblock and a drumstick. A short piano interlude pops in and out to give the tune a little flare, and the lyrics sing with longing: “It seems the more I try/It seems the more days I cry/It seems like every time I think I am free/My old darkness comes around/Crucify me.”

“The Dying Song” is one of the most touching and poignant songs and one of the softest, slowest songs in her repertoire. It is also the longest of most of her songs, so the song has plenty of time to develop and play around with the chief acoustic guitar melody and the piano and string phrases here and there. Her voice is wispy and romantic, and the song showcases her talents perfectly. Tone draws on many inspirations. Musically, she is influenced by Joni Mitchell, Tom Waits, Kate Bush, Lori Anderson and the classics, like Beethoven and Mozart, whom her parents got her interested in as a child. She also admires the writer Tracy Chapman.

As for lyrical content, her interests and inspirations run the gamut: death, abusive relationships, single parenthood, poverty, the joy of motherhood, the dichotomy all humans possess with them, basic injustice and the fact that many still believe that they can take from the earth without giving back, as her love of nature really shines through her writing.

Over the next year, Tone plans to finish her album with Krawczuk and tour, booking showcases and festivals on her way home to British Columbia where she will reunite with her son. She also is working to gain more of a presence in North America and Europe through performances, radio and media outlets. She plans to sell her CDs, music downloads and artwork over the Internet to make herself more accessible to her community of fans around the world.

Tone has also been accepted to Women of Substance Radio Rotation, which plays the best female artists of all genres, both indie and label, selected by a special review board who looks for indie artists that can stand up next to other famous female musicians.

You can currently hear her music on her ReverbNation and SonicBids pages. Her previous songwriting efforts include A Little Disgrace (2005) and Silence (1998), both self-published and released through CD Baby. She is also slated to perform at the Leighton Arts Festival on Sept. 28th and 29th. 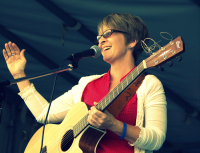