The energetic song, which combines Bollywood-style music with infectious electronic dance rhythms and sounds, was recently posted on YouTube. The video became an instant viral hit, capturing the attention of music fans worldwide.

Neeraj K stars alongside Sharadhi Gadagkar in the video and is the lead singer and songwriter in the 4-plus minute track that combines a boy-girl love story with a powerful message of believing in oneself.

As Neeraj K sings in the video, “This is my life; I’m living it now; no one can stop me, I’ll never back down.”

The production team consists of Director Shayan Fakurnejad, producer Kunal Agarwal, composer Sanjoy Deb, Justin Nguyen, and choreographers Anisha Babbar & Amit Patel. Whether it's the intricate dance moves or the sound & video production, every aspect of this production has been envisioned and created by young college students.

After working hard at creating previous videos, Deb and Agarwal felt they should take their music and video productions to the next level by creating a song and video that was truly original.

With humble beginnings centered around Sanjoy’s sound production on a simple laptop, Kunal & Sanjoy were able to again bring together a team of like-minded individuals at Berkeley.

“We were lucky enough to garner support and attention from professional companies around the area such as Dynamic Sound and Lighting in San Jose, ColorFlow Post, Fantasy Studios, and DTC Film Lighting & Grip.”

After what Agarwal describes as a “leap of faith forward,” to finish the video and bring it to the public, there was a huge viral response on social networks due to a marketing contest that involved Desi Dance Teams across the nation to share “Tonight I Believe,” which caused it to truly become an instant hit overnight.

Upon requests from fans on YouTube, the duo have released a special Tonight I Believe Instrumental as well as a re-cut music video.

With the one-million views on YouTube—a number that continues to steadily rise—and countless downloads, “Tonight I Believe” is sure to become the music track and video of the year.

About Kunal Agarwal Productions
Formed out of a love of Bollywood and Electronic Dance music, Kunal and Sanjoy’s Production team consists of a group of UC Berkeley students all majoring in different non-music related subjects who wanted to broaden their horizons and fulfill their passions. Beginning with their UC Berkeley Azaad dance roots, and moving on to their internationally acclaimed “Chammak Challo” remix video, Kunal Agarwal Productions has developed into a complete in-house production team, specializing in Sanjoy Deb’s Bollywood/Electronic Dance music genre. For more information, please visit http://www.facebook.com/djsanjoy 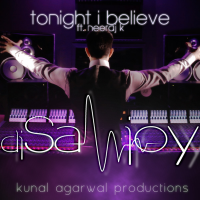