Shenzhen, Guangdong -- (SBWIRE) -- 07/09/2013 -- The Apple App Store its 5th anniversary is approaching. During this celebration period, app store give away numbers of apps and games such as Infinity Blade?, Traktor DJ, Tiny Wings and so on. The number of the app store free apps and games for giving away is still unknown, maybe the list will come out on the 10th.

Apple has sent out a timeline poster to mark the major app downloading milestones. It's not hard to find out that from its birth in 2008 to 2013, downloading times of apps and games range from 10 million to 50 billion. Thanks to the app store of Apple, we are able to make our Apple devices full of fun and be useful for our daily lives. This app store giveaway started on Monday, and it is still on the go. The apps like Traktor DJ, which was $20 before the celebration, now is free on app store, and other apps for giving away were also the top paid apps before the celebration.

The Apple app store had 500 apps when it was first launched in 2008, and now it has nearly 900,000 apps. Among those games and apps, we may be all familiar with Angry Birds, Fruit Ninja and Temple Run, and also an amount of apps which help us to improve our lives’ qualities. Earlier in May, Apple celebrated App Store’s 50 billion download, it is a milestone of the app store and a proof that app store is popular among all the Apple devices’ users.

The games and apps continue to be given away. here are some of them: Traktor DJ (iPhone), Traktor DJ (iPad), Infinity Blade?, Superbrothers: Sword & Sworcery EP, Tiny Wings (iPhone), Tiny Wings HD (iPad), Badland, Where’s My Water, Day One, Bare Foot World Atlas, Over, and How to Cook Everything and so on. The games and apps are of various kinds, check them out and they will make your iPhone or iPad more fun.

The anniversary is on the 10th, and chance is that more apps and games will be free to give away on that day. If you are eager to download as many apps & games as you want, you may want to back up videos in your iPhone to your computer to release more space for the apps. 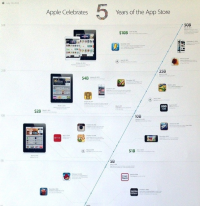