TopStockTips.com Stocks to Watch: NanoTech Entertainment (OTCMKTS:NTEK) Set to Change the Future of Television Thru the 4K Ultra HD Experience.

NanoTech Entertainment (OTCMKTS:NTEK) Director Al Stone added, The SEIKI 4K picture quality with its stunning clarity and vivid colors far surpasses conventional HDTVs. SEIKI televisions have a high level of fit and finish while being much more affordable than the other offerings in this space. We feel by offering a value-priced total 4K Ultra HD package that includes the media player with a television, and a 4K streaming content service, customers will upgrade to 4K without hesitation. This partnership will help drive the future of television.

NanoTech Entertainment (OTCMKTS:NTEK) This stock is ready to explode. The Chart has reset for the next leg up, RSI has started to turn up, The CMF is showing money flowing into the stock again, The MACD is crossing up indicating a buy signal. Key events listed below. When the company startes to ship their Nuvola NP-1 we will see some serious price action as we believe there are big pre-orders and possible large orders from retailers.

NanoTech Entertainment (OTCMKTS:NTEK) announced that it has released its Annual Financials for the period ending June 30, 2013. The report shows the most recent quarterly revenues are up 10% over projections and that the company has sustained its first quarter of profits.

NanoTech Entertainment (OTCMKTS:NTEK) announced that it has completed the third phase of an ongoing plan to reduce the outstanding shares of its common stock. The NanoTech Board of Directors had previously authorized a program under which the company has already retired 221 million shares of its outstanding common stock in privately negotiated transactions earlier this year.

Foley closed by noting "We have also reduced our authorized shares from 990 million to 740 million. We have done this as a further indicator to the investment community of the direction that the company is heading.

NanoTech Entertainment (OTCMKTS:NTEK) announced that it has partnered with SEIKI Digital (www.SEIKI.com). NanoTech will be featuring SEIKI brand's top-of-the-line 4K UltraHD television sets in all of its retail outlets as a bundle with NanoTech's Nuvola 4K UltraHD Streaming Media Player. NanoTech CEO Jeffrey A. Foley stated, "SEIKI Digital is a world-class manufacturer that is making big waves in the television industry. Their products are top quality and their parent company is one of the largest television manufacturers in the world. We are excited to offer our customers SEIKI 4K sets with our 4K UltraHD products."

NanoTech Entertainment (OTCMKTS:NTEK) announced that it has selected the NVIDIA(R) Tegra(R) 4 mobile processor as the basis for its new 4K Ultra HD players. Incorporating 72 custom NVIDIA GeForce(R) GPU cores and the first quad-core ARM Cortex-A15 CPU, Tegra 4 delivers record levels of performance and battery life, along with outstanding graphics. "After evaluating the market and looking at the competitive landscape, the decision to upgrade our processor to NVIDIA's Tegra 4 was simple," stated Jeffrey A. Foley, NanoTech CEO. "Tegra 4 offers native 4K video support in hardware, including support for security and digital rights management with features including HDCP. Beyond 4K, the power of the NVIDIA processor helps us deliver a world-class experience with games, web browsing and a variety of other optimized apps.

Disclaimer
TopStockTips is not a registered securities advisor. Investors should always conduct their own additional due diligence with any potential investment or highlighted company. The company provides information on highlighted stocks via press releases, newsletters and company website, but this should not be construed as a recommendation to buy or sell. Please visit the company website for a more complete list of risks and disclosures. 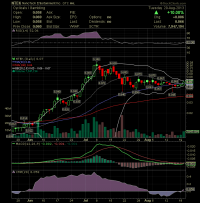