Masterfully crafted by Kerry Freeman, ‘Triple Score’ takes the regular murder mystery novel and fuses it with a heavy dose of real-world human psychology. When three friends die over a twenty-year period, readers are invited to unravel the unknown and learn more about human development than any fiction novel has ever accomplished to date.

Boynton Beach, FL -- (SBWIRE) -- 05/07/2014 -- Murder mystery has long been a staple of the literary world, but most novels stop at the point of solving an investigation. However, a powerful and engrossing new novel by author Kerry Freeman takes readers into far more depth – fusing its fictional narrative with a factual examination of how humans evolve, develop and react to the unexpected.

Everything unravels in ‘Triple Score’ – a chilling reminder of just how fragile humans really are.

They were truly the best of buddies—Phillipe Bardot, Jonathan Stone, James Brady, and Marie Arnett—and they tended to be together in everything, such as school, church, play activities, etc., never thinking about anything except the equality of their friendship.

The four of them were inseparable since they were ten years old, and their best times were the hazy, lazy days of summer but then “the best laid plans of mice and men often go astray.”

The mystery of triple incidents over scores of years, and the effects on the sleepy town of Sebring Florida.

“Allowing readers to enter the hearts and minds of my characters is paramount,” says Freeman, who discovered the joys of publishing during his retirement. “Even average people have minds like fire-crackers, and I take my readers inside these thoughts so they can see the human condition from an entirely new perspective.”

Continuing, “I give a voice to these unsaid thoughts; putting them center-stage so my audience can finally see how murder and tragedy affects peoples’ personal development. There’s a surprise ending that ties everything together perfectly, but if you want to find out what it is – you’ll have to buy the book!”

Freeman is already seeing huge success, with his book being stocked in local libraries and numerous book fairs featuring the title to attendees.

About the author, in his own words:
I am now seventy-nine years of age, and when I retired at age sixty-six, I said I might write a book. But I never could think of an idea that would sustain interest. Now, thirteen years later, an idea struck me. From the point of knowing the beginning of my story and the tentative ending, I started writing, with no knowledge of how the middle of the storyline would be. The words just came to me as I wrote by hand. I picked up a pen and a legal pad and started. What you see is what you get! 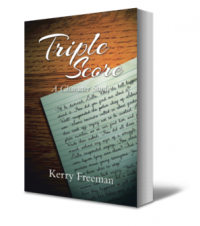