Providing a mental escape for readers around the world, Hatfield’s debut novel has it all; fear, suspense, love, murder and a formidable heroine who represents a little piece of everyone.

New Orleans, LA -- (SBWIRE) -- 03/06/2013 -- While many debut novels simply test the literary waters, that of T.K. Hatfield offers a bold and full-on murder mystery that is competing head-to-head with the best-sellers. Based around the life of heroine Carla Harper, ‘Tumbling in the Downdrift’ proves that there’s no such thing as a normal day on the Florida coast.

Even the sunny clime of a Florida beach town has its dark undercurrents. When the body of a real estate agent is found floating in the water just off the panhandle near Santa Rosa Island, only one woman has the wits, and knows the ways of the waters, to track down her killer. That woman is Carla Harper, though she’s not exactly in the best spirits these days to go chasing the bad guys. Tumbling in the Downdrift is the debut novella by T.K. Hatfield that tells a searing story of murder and betrayal, with a loyal mutt thrown in for good measure. It’s a page-turning mystery that will enthrall readers who like their characters with a dash of sea salt, and their murder served beachside.

Out on her boat, Tenacious, on the beautiful Emerald Coast beaches—in an effort to recover from a tragedy involving her late husband Marty—former Coast Guard officer Carla Harper discovers a strangled body that turns out to be her friend. Local real estate agent Crystal Mason was the wife of Dale, and the couple had spent many a convivial evening with Carla and Marty. Before she knows it, Carla is wading knee-deep in the investigation, in spite of the fact that she doesn't have law enforcement authority in Florida. Using her military investigations training, Carla works to clear Crystal’s husband Dale from suspicion, with a trail of leads wending its way as far as Mexico to find out just what a wiry Dockside dude knows about the circumstances. And, when a tony local named Nicholas Dickson Price gets involved, the stakes become perilously high.

As Carla chases down leads, the bodies mount and Carla herself becomes the target of break-ins and police acrimony. With her colorful mother, Jolie, and trusty four-legged sidekick Molly, Carla musters the strength to sleuth out the real killer, all while grieving the loss of Marty. As the plot thickens and the pace quickens, Tumbling in the Downdrift offers a riveting maritime mystery that’s sure to make your blood pump at every watery turn.

As the author explains, Harper is a microcosm of humanity.

“Carla represents some part of all of us, strong, intelligent and maybe a little rough around the edges, but still very feminine and vulnerable whether she likes it or not, and dealing with the thing we all fear the most – losing the love of your life,” says Hatfield.

Continuing, “With everything she encounters she retains her confidence and will never give up.”

While this is the first introduction to Harper, she has many new adventures in the works.

“I have begun writing Carla’s next adventure and have the bones of 4 more that will follow her as she gets involved in cases dealing with such issues as environmental terrorism, human smuggling and maritime piracy,” Hatfield adds.

With no release dates yet made public, readers will need to eagerly await further announcements from the author.

In the meantime, ‘‘Tumbling in the Downdrift’ is available as an e-Book or paperback as of March 8, 2013. For more information, visit the author’s official website: http://www.tkhatfield.com/

About T.K Hatfield
Born in Florida, T.K. Hatfield joined the US Coast Guard in 1987. Still on active duty, T.K. is a senior officer, a Naval War College graduate, holds a degree in Environmental Studies and is working on her Master’s thesis. She and her husband divide their time between Louisiana and Florida. 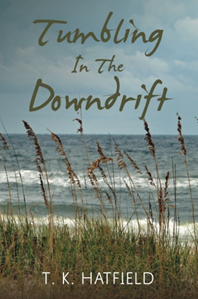