Tune in to the Gillette Nutrition Show with Guest, Paul Connett to Learn About the Harmful and Toxic Effects of Fluoride

Get the real truth on fluoride and how it is very damaging to the body, especially the endocrine system. Healthy teeth come from a healthy diet, not fluoride. Tune in on Monday, July 28 at 4pm, Pacific.

Phoenix, AZ -- (SBWIRE) -- 07/29/2014 -- We've all been told for years that fluoride is necessary for healthy teeth. This is another myth from the mainstream medical system. Fluoride does occur naturally in the soil, but the fluoride in our water is a highly toxic by-product of the aluminum and phosphate fertilizer companies. Fluoride is a neurotoxin. Fluoride causes many problems in the endocrine system and in the brain as well as staining teeth. The key to a healthy mouth, gums and teeth is proper nutrition, especially foods that contain calcium, magnesium, vitamin A and vitamin D.

Listen in as I interview Paul Connett, an expert on the dangers of fluoride and one of the founders of the Fluoride Action Network.

Dr. Paul Connett is a graduate of Cambridge University and holds a Ph.D. in chemistry from Dartmouth College. From 1983 until he retired in May 2006, he taught chemistry at St. Lawrence University in Canton, NY where he specialized in Environmental Chemistry and Toxicology. Over the past 29 years his research on waste management has taken him to 49 states in the US, 7 provinces in Canada and 61 other countries, where he has given over 2500 pro bono public presentations. Ralph Nader said of Paul Connett, "He is the only person I know who can make waste interesting.”

A recent essay on “Zero Waste for Sustainability” along with several videotapes Paul has made on Zero Waste, can be accessed at http://www.AmericanHealthStudies.org This site is hosted by the group AEHSP (American Environmental Health Studies Project) which Paul directs.

In 2010, Paul gave two presentations on Zero Waste to the United Nations Commission on Sustainable Development.

His book The Zero Waste Solution: Untrashing the Planet One Community at a Time with a foreword by actor Jeremy Irons was published in 2013 by Chelsea Green.

Paul Connett has researched the literature on fluoride’s toxicity and the fluoridation debate for 18 years. He helped found the Fluoride Action Network (FAN) see http://www.fluoridealert.org. He has given invited presentations on the dangers of fluoridation to legislative and research bodies and local communities in Australia, Canada, Germany, Ireland, Israel, Japan, New Zealand, the UK and the US. This has included invited presentations in 2003 to both the US EPA and the US National Research Council.

In 2010, with two other authors he published the book, The Case Against Fluoride… (Chelsea Green), which contains 80 pages of citations to the scientific literature. As of June 2014 there has yet to be a scientifically referenced response to this book. 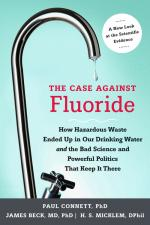