TV Show Creator Launches Indiegogo for on the Road Production

Down the Highway - Where Music Meets The Open Road

Los Angeles, CA -- (SBWIRE) -- 10/06/2014 -- A new music interview web show created by Antony Berrios and hosted by musician and motorcyclist Ian Harrower is riding into town. Down the Highway has Harrower of the band Red Roses, riding city to city on a 1967 Triumph TR6C while stopping to drop in on American roots music musicians such as Social Distortion guitarist Jonny "2 Bags" Wickersham; poet, artist, and X vocalist Exene Cervenka; and former Black Flag frontman / OFF! vocalist, Keith Morris. Three more interviews will be released...Phil Alvin of the Blasters...Mike Watt and Songwriter/musician Alain Whyte.

Interviews will not be limited just to musicians, but will also include influential guitar makers, studio engineers, painters and photographers inspired by the rhythms of music made in the USA. Harrower, who's performed with various outfits as percussionist/bassist, he's also proficient with the dobro, up right Bass, autoharp, mandolin, banjo and accordion, will fuse his gift of gab with the call of the open road to entice viewers with the history and inspiration behind America's musicians. Angel investors helping fund the Down The Highway TV Show campaign to the next level will be eligible for perks such as thank yous, digital downloads of the show, stickers, buttons, behind the scenes photos, T-shirts, live performance downloads, digital downloads of Red Roses' new album, lunch in Los Angeles with show host and show creator, group motorcycle ride with show host, time on show set, and private screening of the show.

About Down The Highway
The team also understands not everyone may be able to give money to help this project, so they ask that those who cannot give monetarily help by spreading the word about the Down The Highway TV Show campaign online through social media such as Facebook, Twitter and Tumblr or record a video challenge for Vine, Facebook or Instagram to invite friends to give to or share this Indiegogo fundraiser. Include #DownTheHighway in all posts.

For more information, DOWN THE HIGHWAY 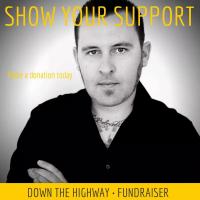