Teson’s latest novel thrusts readers into a world where nobody knows what to believe and where anything is possible. While Romantic Suspense is at its heart, Twist will delight any reader craving a literary escape from the norm. For the author, the project continues an unwavering passion for writing that developed during a successful fight against Stage IV cancer.

Sunset Beach, CA -- (SBWIRE) -- 03/14/2014 -- While Roni Teson is now a respected author with accolades from both the 2013 Reader's Favorite International Book Awards and the 2013 Los Angeles Book Festival, it’s hard to believe that just four years ago she was fighting for her life. However, a writing passion that developed during treatment for cancer has since become an integral part of Teson’s life, with the cancer now in remission.

Teson stormed onto the literary scene in 2012 with Heaven or Hell, which garnered critical acclaim on the international stage. Twist follows this success and is poised to have equally as big an impact.

A romantic suspense full of twists and turns . . . When a steamy incident in the back seat of a borrowed car plunges sixteen-year-old Beatrice Malcolm smack in the middle of a global manhunt, she discovers that the search for her fugitive father has more to do with her than she could ever imagine. With her mother gone, Bea's life is unraveling in the worst possible way as she's thrust into a world of government conspiracy, insanity, and mind-altering experimentation that forces her to make a life-or-death decision as to who to believe—the FBI or her father.

In Twist, Roni Teson has crafted a suspenseful tale of love, betrayal, and intrigue with a cast of characters who will leap off the pages and stay in your heart long after the last word has been read.

As the author explains, the past four years have transformed her life dramatically.

“I rapidly went from a woman with a dream of writing, to a cancer patient and then to an award-winning author. I’m a big believer that everything happens for a reason, and while I know it sounds strange, the illness and finally going into remission allowed my writing passion to burn even stronger,” says Teson, who is also working on a book about her life story.

“Aside from the obvious medical intervention, every cancer patient finds her own very personal form of treatment. For me, it was putting pen to paper and allowing my imagination to run wild. I had a lot on my mind while living with cancer, so writing was the escape that gave me hope. Look at what it has turned into now! Twist is the latest chapter in my life story – and there’s plenty more to come.”

About Roni Teson
Roni Teson's dream to become an author was realized after she was diagnosed with stage IV cancer and wrote her first novel Heaven or Hell, which received an award at the 2013 Reader's Favorite International Book Awards and the 2013 Los Angeles Book Festival.

A believer in the adage ‘everything happens for a reason’ when Roni went into complete remission, her passion to write intensified, along with her imagination. Her writing that was once a part of her cancer recovery became an integral part of her daily life.

Twist, her most recent novel is a suspense-driven romance story that is delivered through a cast of characters who will leap off the pages and stay in your heart long after the last word has been read.

Roni lives in Southern California where she writes, reads, raises money for cancer research and lives with gratitude. 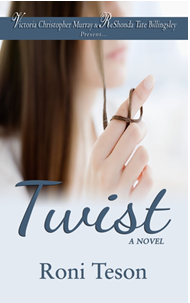