Joey Arias & Raven O, summer-long show on Cape Cod to run from July 6 to September 1 at The Art House

Provincetown, MA -- (SBWIRE) -- 07/08/2013 -- Nightlife fixtures Joey Arias & Raven O are joining forces for the first time in a decade. This summer the two will bring their burlesque star-status to Provincetown with their new show Wanted Live at The Art House from July 6 to Sept. 1. For tickets, please visit http://www.ptownarthouse.com or call 800-838-3006.

Raven O just finished a six-year run as the “Ringleader of Debauchery” for the notorious The Box nightclubs in NYC and London, and more recently a six-month run at The Act in Las Vegas. His 2010 off-Broadway show Raven O, One Night With You was critically acclaimed, prior to which he was featured for three years in Cirque Du Soleil’s Zumanity.

Joey Arias has been a fixture of New York City’s vibrant downtown performance scene for three decades, whose recent solo world tour included a concert at Central Park Summer Stage and The Southbank Centre in London. Prior to this, Arias With a Twist played to sold out crowds in NYC, Los Angeles, Washington DC, about which the New York Times proclaimed: “Eat your heart out Madonna.” He also recently completed a 6-year run as the MC of Cirque Du Soleil’s Zumanity in Las Vegas and arrives in P-Town fresh off of a 4-week residence at NY’s Joe’s Pub.

The Dynamic Duo both have their roots in Jazz. Arias, a drag chanteuse, has been called “Lady Night” to Billie Holiday’s “Lady Day”. The androgynous Raven O is described as “the new face of jazz”. The pair also plans to mix standards and pop with their unique chemistry and comedy which has flourished during their 20-year relationship as performers and close friends. “P-Town has grown into an amazing place for shows and art and Raven and I can’t wait to be part of it” Arias said. “We want to make people’s vacations complete, to dream and laugh at the world around us.”

The Art House is sponsored by Cape Air, the Anchor Inn Beach House, and SethTV.com 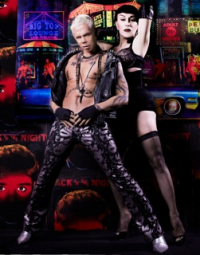