Philadelphia, PA -- (SBWIRE) -- 05/14/2014 -- Carvin Haggins 2 time Grammy Winner best known for working with the biggest names in the music industry such as, Musiq SoulChild, Raheem Devaughn, Justin Timberlake and Chrisette Michele, Chris Brown and more. Haggins has had enough of the over-sexed, murderous, drug dealing being emphasized in music over the air waves.

Carvin went on to say "the way a lot of the music has gone over the years there is simply no "balance" the majority of it is negative. He gave examples in saying, even tho you had NWA there was Public Enemy, there was a balance in the music, there were choices".

Carvin states, he does not have a problem with artist expressing themselves, however they should keep in mind the messages they are sending to young children. The violence depicted in music is taking away from the artists true "creativity". Carvin noticed several differentiating factors in the distribution of music over the air waves. The differences on pop radio vs urban radio stations are significant. Haggins noticed the lyrics on pop radio are often time bleeped out or removed, vs. on urban radio the lyrics are "explicit".

Haggins started a petition on Change.org

Carvin is now holding Urban Radio Accountable for not making the music "child friendly" the way pop radio does. In specificity, Carvin will be Boycotting and picketing against Philadelphia's Power 99 Radio Station on June 7, 2014.

To see Carvin's PSA video where he gets into specific details on the music being played on Urban radio that promotes, date rape, "quickie sex" "oral sex" in explicit language.

Carvin G. Haggins is a Grammy Award Winning and Multi-Platinum Selling Song Writer, Producer, Engineer, Co-Founder of Karma Productions, Co-Creator of Forever Music, Inc., and a 2011 Creative Ambassador for the city of Philadelphia. This year, he and his partner in production, are celebrating ten years of having placed a top 10 hit, every year. The Philadelphia native has written hit records for Mary J. Blige, Jill Scott, Faith, Justin Timberlake, Raheem DeVaughn, Musiq Soulchild, and has earned a reputation for creating songs that “say something.”

Carvin was raise in the heart of Philadelphia’s Badlands, He began making music at age 11, and has developed a style that is uniquely his own. From his chart topping songs “Love,” performed by Musiq, “Customer,” performed by Raheem DeVaughn, “Finding My Way Back,” performed by Jaheim, and “If you Leave,” performed by Mary J. Blige and Musiq, Haggins has always believed that the best songs come from real life experience.

In the early 1990’s Carvin met up with DJ Jazzy Jeff and began working at his production company, “A Touch of Jazz.” It was there that Carvin met and instantly connected with music producer, Ivan Barias. The pair has become a force in the music industry. Not only have they topped the Billboard Charts several times, they also created Karma Productions in 2001, and are now one of the most sought after producing teams in the country.

Carvin, who owns his own studio, is also widely known for his work done on movie soundtracks. He has music on “Love Jones” Soundtrack, “The Nutty Professor II” Soundtrack, the “Rush Hour 2” Soundtrack, and collaborated on music for the Will Smith movie “Wild Wild West” Soundtrack.

On Sunday and Wednesday, you’ll find Haggins at Southern Baptist Church in Philadelphia, where he is a Reverend, Sunday School Teacher, and heads up the Youth Ministry. 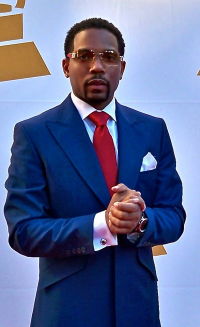