Canadian duo Tzadeka are set to release their latest album, a follow-up to the acclaimed Piece de Resistance, and their track "My Beauty's Inside" is featured on WiFi PR Group's Indie Anthems Vol. 3.

Las Vegas, NV -- (SBWIRE) -- 01/13/2014 -- Tzadeka is an Edmonton, AB, duo that knows just how to mix and match. With hip hop as an anchor, vocalist Maigan van der Giessen and her DJ and producer Mark Czuba, aka Madame Wang, weave nearly every genre imaginable into unique, unprecedented music that spells out the future of fusion-centricity. The beats are solid, the lyrics are crisp and bold, and the instrumentals are transcendent accompaniments to the vibe of each track.

Following their latest effort Piece de Resistance (2011) and their self-titled debut (2009)—both released on Madame Wang’s own Little Whore Records—the latest album from Tzadeka is slated to be released this fall, with another album they’re recording at another studio fast on its heels.

Tzadeka’s song, “My Beauty’s Inside,” will be featured on WiFi PR’s upcoming addition to its digital mixtape series, Indie Anthems Vol. 3, set to release in October.The track’s monotonic chorus locks you into the song, focusing your senses on one clear message until blasting back into tight, lyrical lines like, “Excuse my vulnerability, when it’s all good just let it be / I’m giving you a piece of me / for free /cause that’s my strategy: I give to you, you give to me / We call it generosity, my stomach’s in a knot, you see.” Madame Wang, keeps a tight beat interwoven with a spacey, ethereal synth and later twinkling piano melodies that, when combined with van der Giessen’s voice, add depth to what might otherwise be a standard hip hop track.

This fresh point of view on the potential of hip hop is what makes Tzadeka a group to give a good, long listen to. Breaking down any known barriers, they extract all the best flavors from a slew of genres to get one hot, stewing melting pot of well-meshed genres.

A stark contrast to “My Beauty’s Inside,” “We Are Wolves,” off Piece de Resistance, takes a slower, more melodic approach that features a crazy set of background instrumentals from Madame Wang. A deep bass track feeds into a churning, vibrating guitar line and what sounds like a haunting clarinet melody—or maybe even a kazoo—over light, steady percussion. Van der Geissen’s voice takes a less hip hop approach to the lyrics and instead has a smoky, sultry and almost jazzy way about it as she croons out long, full waves of sound.

One of the coolest aspects of this group is the influence of “artivism” on van der Geissen’s lyrics. A devotee of inspiring and teaching the marginalized youth of her community about the power of art and music, she is often inspired by her experiences with these youth as well as her life as a single mom. She writes from the heart, handling both struggles and victories in her life through her words in addition to themes of love, power and politics.

Van der Geissen’s other impressive musical accomplishments include her juror selection for the 2009 Western Canadian Music Awards’ urban music showcase, in which she was the only woman to perform. In her previous band, Eshod ibn Wyza, she shared the stage with such industry bigwigs as K’naan, Kinni Starr and ?uestlove. She was selected as an artist for the United Way’s 2012 National Campaign to write a song and record a music video that was broadcasted across the country, entitled “United We’re Strong.” She was also asked to compose a song for National Children’s Day 2012, entitled “We Have a Voice,” by the provincial government of Alberta, and this year she will help to rerelease the song and create a music video for the government to circulate.

Tzadeka will perform at the Kaleido Festival in Edmonton’s inner city on Sept. 14th on the hip hop stage and Sept. 15th on the main stage as well as at Blue Chair Café on Sept. 27th. In addition to those shows, they hope to go on a small tour around Eastern Canada.

Listen to Piece de Resistance, “My Beauty's Inside,” and other tracks on their SoundCloud page, and check out videos for their songs "Shades of Summer" and "Make Noise." You can purchase Tzadeka’s albums at their live shows as well as from their website or Little Whore Records. 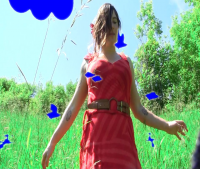