Berkeley, CA -- (SBWIRE) -- 12/01/2011 -- In recent years, Bollywood music has exploded in American cinema and television shows. From the Oscar-winning Slumdog Millionaire’s “Jai Ho” to Bollywood becoming a permanent dance staple on the popular show So You Think You Can Dance, it is clear Americans have developed an appreciation for Indian artists.

Off the heels of their smash hit remix of “Chammak Challo” featuring Akon which to-date has garnered more than 400,000 YouTube views, Kunal Agarwal Productions recently released their new music video “Love the Pressure.” The new single is a feel-good, club joint with a fantastic vibe that mixes electronic dance hits from artists such as Imran Khan, Nadia Ali and A.R. Rahman. The top-notch music video and track feature singer Neeraj K., who sings the vocals for “Bewafa” and “Hey Girl,” director and videographer Kunal Agarwal, and famed DJ Sanjoy Deb. The result is an edgy mix of music and synthesis between cultures from the East and West.

Hailed as “Epic” by YouTube viewers, new music video “Love the Pressure” tells the all-too-familiar story of a couple that falls in love and is inevitably torn apart by infidelity. In the video, leading lady Chandana Kanaglekar cheats on her leading man Neeraj K., well all the while dancing to an intricately-choreographed upbeat mix of Bollywood-electro house music.

According to Kunal Agarwal Productions, “Love the Pressure” is dedicated to popular Punjabi singer Imran Khan due to his inspirational determination to cross cultural barriers with music.

“While it is easy for big budget films to infuse themselves into foreign markets, it is truly phenomenal for an artist like Imran Khan to become such a famous star and have beats from songs like ‘Amplifier’ used in American remixes,” said Kunal Agarwal Productions. “We truly love the energy and perseverance Imran Khan has shown to his audiences, as well as the efforts he has put into illustrating to the world about his life experiences, such as in ‘Bewafa.’ We dedicate our song ‘Love the Pressure’ to him.”

About Kunal Agarwal Productions
Formed out of a love of Bollywood-inspired music, Kunal Agarwal Productions consists of a group of UC Berkeley students all majoring in different non-music related subjects who wanted to broaden their horizons and fulfill their passions. Beginning with their UC Berkeley Azaad dance roots, and moving on to their internationally acclaimed “Chammak Challo” remix video, Kunal Agarwal Productions has developed into a complete in-house production team, specializing in the Bollywood-electro house genre. For more information and to listen to the smash hit “Chammak Challo” and the new “Love the Pressure,” visit http://www.SanjoyDeb.com 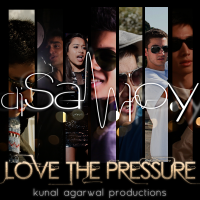