T. J. Blake is delighted to announce that his new novel, Deception: A Love of Lies, is now available in print and eBook formats. Fans of Blake will be delighted to hear that after a short break, he has now released this new novel; which is as unpredictable and suspenseful as his previous books. This new thriller will have no problem in drawing you into the unique world of avid dog walker, Billy. The story is told by Billy himself, and we are instantly pulled into his interesting habits and admiration of a particular female dog walker, Eve. Although Billy enjoys walking his dog, Ella, he also thrives on analysing the recent occurrences in 'his' woodlands from the previous night and early morning; as well as keeping an eye out for Eve from afar. T. J. is certain that Deception will easily cater to his fans of his previous releases, Endurance and The Author – but isn't afraid to admit that this book is slightly different to those at the same time.

About T. J. Blake
T. J. Blake, 22, is a self-published author, and a copywriter for a digital marketing company in Hampshire. His writing career began at an early age. "I was around the age of seven. Simply put, I LOVED writing. I had a journal in which I would write multiple short stories and read them out to my parents (or anyone who would listen)." T. J. explains. After being temporarily side-tracked by videogames, like most young boys, T. J. went back to his first love – writing – and since then has not looked back. The fact that he studied Creative Writing with English Language & Communications at Kingston University also helped him reunite with his old friend. Blake describes creative writing as a 'powerful tool'. He believes it to be a safe-haven, but also likes the fact he can connect with his readers – giving them a moment to escape their real life and enter his own fictional world. "Writing is a powerful tool, especially Creative Writing. It gives you the freedom to create a new world inside yours and your reader's mind."

For this story, which was churned and planned within Blake's mind for a few years, it was finally released when he decided to use it for his final Creative Writing assignment at university – which was then known as 'The Dog Walk'. T. J. worked closely with his lecturer and produced an excellent start to his new book; as well as receiving a First for his thriller piece. From this point, he knew this was going to be his next release. With a further year and a half of work, Blake decided to call his book Deception: A Love of Lies.

Deception is available for purchase at Barnes and Noble (paperback only) and all Amazon sites in paperback and eBook versions for just £7.50 ($13.52) and £2.50 ($3.12) respectively. Interested readers can find out more about T. J. Blake and his books on his personal blog page, T. J. Blake #Author. They're also encouraged to follow him on Twitter and Facebook. T. J. Blake will be featured on various Indie Book sites over the coming months – so do keep an eye out, and feel free to get in contact with him. 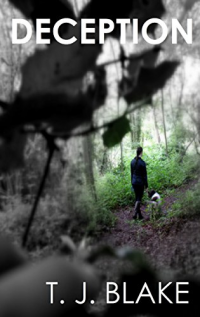