Ellsworth, ME -- (SBWIRE) -- 08/15/2013 -- According to Jonathon Ray Spinney, our current economy is fatally flawed. American corporations are destroying community economies as well as State and Federal tax bases. Increasingly, large corporations are cutting back employee hours to part time. They are phasing out good paying jobs, hiring at lower wages, cutting benefits and health care which effectively destroys community economies. On the other end, corporations manipulate their tax liabilities and often pay little or nothing to State and Federal governments – governments that are now struggling to deal with the increasing social/economic needs of people. People are being forced into social welfare and large corporations are contributing little or nothing into the social welfare system putting individuals, communities and governments into ever increasing debt.

Now is the time to begin creating a bridge to new economic prosperity by:

1. creating and sustaining a new economic/philosophic model based on the actual deeds and meaningful human actions of sharing and working towards a common humanitarian vision of peace and prosperity for all.

2. eventually removing paper (valueless) money from community economies and replace it with a form of economic compensation that is rich with human purpose, social/economic equality and humanitarian advancement.

“The economic compensation or credit/reward that United Credit envisions would be far more valuable than money – something that would never be affected by inflation, bank failures, or economic collapse. United Credit proposes a new economic philosophy and bridge ideas to creating a blanket security system that could provide for the needs of all people who are willing to enter a new humanitarian age of helping others,” explains Jonathon Spinney.

To help create a bridge to new economic prosperity for all, Jonathon Spinney and Red Bear Press have recently released a ground-breaking new book: ‘United Credit: Prosperity without Money’. This book puts the power of our economic future in the hands of readers.

Let’s face it – the Government is not going to change things. It’s up to individual citizens to stand up and lobby for something new. Our current economic model is not working – it requires re-building from the ground up. Social and economic equality is the only way forward. Using this model, we can rapidly advance humanity in ways we can currently only dream of. In short, what United Credit would potentially create is a “measure of wealth in a different way — a way that transforms the false economy serving the rich into a real economy serving people.” he adds.

In his book, Jonathon Ray also advocates for an Economic Bill of Rights as well as an International Economic Congress to insure the world’s resources are distributed fairly among Nations and peoples.

The book is supported by an informative website that includes the foundation’s charter and latest news. Visitors also have an opportunity to learn more about United Credit’s vision and preview sample chapters before making their book purchase.

“Part of our efforts is to make as much information available to the public as we can. Our website will always be evolving and it’s a vital online hub for our foundation. We invite you to visit our website, buy the book and help us create new economic prosperity – Prosperity without Money”.

About Jonathon Ray Spinney
Jonathon Ray Spinney has worked building new homes and renovating old homes for over 40 years. During this time, he studied philosophy and Theology at the University of Maine and founded Medicine Bear Publishing in 1995. For many years, Medicine Bear published and distributed alternative health, spiritual and metaphysical books and information. His research and writing interests have developed to take on some of the most important issues facing humanity today – economic, alternative energy and environmental protection.

“We are living in an unforgiving economic calamity. Now is the time to create new ideas and examples of real economic prosperity – prosperity that is equally shared among communities, States and Nations. The creation of a United Credit economy will consume much of the time I have left in this life passage.” 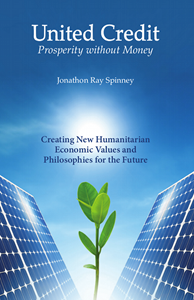