Carrabelle, FL -- (SBWIRE) -- 02/29/2012 -- In response to the Chardon, Ohio High School shooting, Monday, February 27, 2012 the Universal Life Church, World Headquarters, Inc., a non-denominational world-wide Christian ministry based out of Carrabelle, Florida, within hours of the shooting, mobilized over a dozen high school students involved in its International youth ministry program, including students out of Cleveland, Ohio some 30 miles away. The group, all high school youth helped rally prayer groups and met with some students hoping to offer support to their devastated peers, most of whom they did not know personally. The youth were a part of the church's, International Coalition For Youth Of Christ outreach program which, itself originated out of another High School Shooting at Columbine High School, April 20, 1999. On that morning in Littleton, Colorado, Eric Harris, 18, and Dylan Klebold, 17, killed 12 students and a teacher, and wounded dozens of others before eventually killing themselves.

In Chardon, on Monday morning, at aproximately 7:30am, the alleged gunman, T.J. Lane, recently released to have been a "Troubled," and often "Bullied," student at a nearby school opened fire with a 22 caliber handgun inside the Chardon High School cafeteria. Initially, the rampage left one student dead and several others wounded, local officials said. As of the following Tuesday afternoon three of the reported five students shot were confirmed dead: Russell King Jr., 17., Demetrius Hewlin and Daniel Parmertor, 16.

The ULC World Headquarters, Inc., Vice-President and Founder of the International Coalition For Youth Of Christ, Pastor Daniel "Bodhi" Chapin, who had also responded in 1999 at Columbine High School as a crisis counselor, released an official statement from his office in Southern California, Tuesday afternoon, on behalf of the church and its officers stating: "On behalf of our President, Michael Cauley, our worldwide ministers and most especially our youth, we offer our sincere condolences and ongoing prayers to the victims families, friends and overall community members. Our prayers, however, will be followed with action to support as best we can those affected locally and Nationally by this devastating tragedy."

To that affect, the church plans to continue its' support through a letter to local community leaders, the school itself and victims families hoping to encourage individuals and the community to continue to rally together in support of each other. Additionally, the church has extended the services of its' Medical Advisory Board, composed of Pastoral Counselors & Crisis Interventionists; as desired and needed. As of Tuesday afternoon, several ULC World Headquarters, Inc., ministers, from Florida to South Carolina, penned support to families and the overall Chardon, Ohio community.

Jennifer Bradley, 17 of Cleveland, Ohio was one of the youth from the ULC's youth ministry, who drove into Chardon, Ohio Monday evening to attend a prayer group at a local church stated, "This is so devastating but we are here to show our support and be a friend during a time when our peers so very much need it. That's what Christ would do. We believe its about prayer but also getting off our needs and being a real manifestation of that prayer." 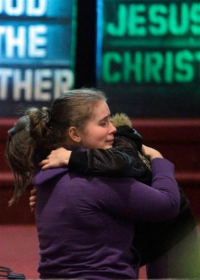