Failing to stop and accelerating back to #2 on Amazon’s Hard-Boiled Mysteries list on April 10th, Anonymous-9’s ‘HARD BITE’ continues to knock down everything in its path. As readers flock to get behind the wheel of the book’s hit-and-run adventure story, the author braces for continued success.

Los Angeles, CA -- (SBWIRE) -- 04/15/2013 -- With a growing audience and the recent announcement of an upcoming paperback release, Anonymous-9’s ‘HARD BITE’ is an unlikely yet proven literary success. This week saw yet another accolade for the author as her book shot back to number two on Amazon’s Hardboiled Mysteries bestseller list and made its way to the Thriller list, Top 100.

The book’s gripping and quirky plot is likely taking the credit. Boasting a paraplegic vigilante, his monkey side-kick and their steadfast determination to take revenge on hit-and-run drivers, ‘HARD BITE’ proves the lengths one man will take to give evil its just desserts.

Dean's gentle, doting nurse knows nothing about what he's up to and when Sid tears out the throat of a Mexican Mafia member, Marcie gets kidnapped in order to force Dean's surrender.

Armed with nothing but his wits, Sid, and a sympathetic streetwalker named Cinda, Dean manipulates drug-cartel carnales and the Los Angeles Sheriff's Department in a David-against-Goliath plot that twists and turns to a heart-pounding finale.

“I enjoyed some Amazon bestseller positions after the book’s initial release, but was both shocked and delighted to find myself back at number two for Hardboiled Mysteries on April 10th,” says Ash.

Continuing, “However, my biggest kick came from seeing the book finally crack the Thriller bestseller list. Blasted Heath, my digital publisher in Scotland is behind me all the way.”

“If gritty crime fiction with a pulp flavor is your thing, this read is for you; and this writer is definitely one to watch. She engages your emotions right from the start, and the ending will stay with you for a long time,” says Werner A. Lind.

Ash is excited about what the future holds. In the meantime, the paperback version of the book will be available from June 20th through Amazon, as well as from New Pulp Press. Amazon listing: http://amzn.to/Zq1ujq

About the Author: Elaine Ash
Elaine Ash adopted the Anonymous-9 pseudonym back in 2007 in case her experimental fiction wasn't "accepted" by the grassroots crime-writing community which was starting to surge online. When her short stories started getting nominated for awards that fear was put to rest but the pen-name stuck.

In 2012 she was signed by crime e-publisher BLASTED HEATH (helmed by Edgar-Award nominee Allan Guthrie and partner Kyle MacRae). Shortly after the release of her first e-novel, HARD BITE went to #2 on the Amazon Best Seller List in Hardboiled Mysteries, Paid. After two weeks in the Top 100, she signed a print deal with New Pulp Press (release June, 2013). Anonymous-9 is known for prodigious detail, research, rewriting and a dark sense of humor.

Recognitions include a 2012 Readers' Choice Award from The House of Crime and Mystery, Canada; Spinetingler Magazine's Best Short Story on the Web 2009; a nomination for the same award again in 2010; two Derringer Award nominations sponsored by The Short Mystery Fiction Society; and a Thriller Award nomination by a first-round judging committee of the International Thriller Writers. 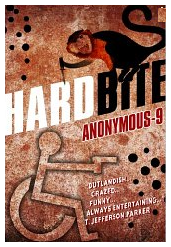