Brand new track “What’s Good” is ready to stir up a buzz!

New York, NY -- (SBWIRE) -- 11/26/2012 -- Dallas, Texas rapper/songwriter Jafeezie is a multi-talented musician who has stepped up his rap game to a superior level since his last two album releases “Hustle or Die” & “Birth of a Legend” bringing us to the newest chapter in Jafeezie’s career with his brand new hit single “What’s Good” (listen via REVERBNATION) featuring soulful singer Maskerade on the vocal choruses. If you don’t know about Jafeezie yet he was born in Kingston, New York prior to moving to the South with family. After moving around at a young age from place to place Jafeezie found his life’s connecting and outlet in music. Starting to dabble in music at a young age of 14 years old, he has continued to expand upon his sound and let it grow into the powerful voice with the golden smooth delivery you hear on his newest track release ”What’s Good”.

The release is completely radio ready and fully produced to the most professional of standards. With one listen to the single “What’s Good” you’ll instantly see why Jafeezie should have already been on your radar. The single encompasses all those elements of that sexy smooth rap sound that appeals to a wide variety of listener demographics. There is nothing left out or not done to the max. Jafeezie prides himself on putting his heart and soul into everything he writes and showcases himself amazingly with this release that he intends to take him nowhere short of the top of the music charts. With press and media outlets already picking up on the track, it’s only a matter of time before Jafeezie becomes a household name.

For more information please contact Jason Kemp at jafeezie@yahoo.com and/or via direct phone at +1 (469) 226-2195. Please visit Jafeezie on his social network at CDBABY, FACEBOOK & TWITTER for updates. 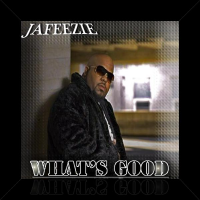