Written by Diana Warren and with a foreword by the renowned Dr. James W. Forsythe, ‘Say No To Radiation and Conventional Chemo: Winning My Battle Against Stage 2 Breast Cancer’ calls on cancer patients to turn their back on traditional money-making treatments that most often leave people dead. Instead, Warren urges them to opt for the underpublicized ‘Greece Blood Test’ and IPT Chemo – a non-toxic treatment using up to 90% less medication.

Las Vegas, NV -- (SBWIRE) -- 12/04/2013 -- While the world of medicine claims daily breakthroughs, the only statistic appearing to rise is the amount of money pharmaceutical and associated medical firms rake in. Nevada’s Diana Warren, a Breast Cancer survivor, is so concerned about the medical world’s lack of concern for its patients that she is sharing a bold message with fellow Cancer patients – ditch traditional radiation and chemotherapy.

However, Warren’s words are not without warrant. Having cured her own Cancer against the odds by opting for natural non-toxic treatments designed after undergoing the ‘Greece Blood Test’, Warren’s story and life-saving message for millions is shared in her powerful new book.

‘Say No To Radiation and Conventional Chemo: Winning My Battle Against Stage 2 Breast Cancer’ introduces readers to powerful alternative treatments that could be safe options for many patients.

Internationally acclaimed integrative medical oncologist James W. Forsythe, M.D., H.M.D., has praised Diana Warren for courage and tenacity in her arduous battle against Stage II breast cancer. Doctor Forsythe insists that “Diana deserves kudos from people around the world, for refusing to subject her body to unnecessary standard chemo and radiation that allopathic oncologists kept trying to require her to endure.”

Featured in many hot-selling books written by others including media personality Suzanne Somers, and also the author of many successful books himself, Doctor Forsythe has hailed Diana for her dogged determination amid a non-stop quest to find effective natural, non-toxic treatments as her health deteriorated, while also hunting for an experienced doctor licensed to avoid high-dose poisonous options. “I strongly recommend that everyone who suffers from cancer read Diana’s compelling tale,” Doctor Forsythe said. “Today, Diana is playing a formidable role in helping to lead the way as a true champion in a quest to inform the public of the urgent need to avoid toxic treatments when feasible in certain circumstances, and how to find acceptable natural remedies—plus the importance of avoiding ‘standard-of-care’ chemo and radiation when under the care and guidance of a qualified, licensed medical professional.”

After reading many hundreds of books on cancer, Doctor Forsythe hails Diana’s publication as being “by far among the best from the viewpoint of a person who never attended medical school. Readers undoubtedly will benefit when learning of the exceptional example Diana has set for us all.”

As the author explains, her unique treatment plan was the result of her decision to pursue the little-known ‘Greece Blood Test’, recommended by Doctor Forsythe.

“The Greece Blood Test details exactly what combinations of supplements, drugs and treatment will cure 'your' particular kind of cancer. However, it’s hardly ever used in the USA – a country that would rather focus on pharmaceutical profits and killing millions of patients painfully in the process. If you find a doctor willing to send your blood to Greece, use the IPT method and follow the resulting ‘road map’, maybe you can have the same results I have had. The key is to find a Doctor who already has a relationship with the facility in Greece,” says Warren.

To date, the book has garnered a string of rave reviews. For example, one reader comments, “I have a very good friend that needs to read this book immediately. Why isn't everyone getting the Greek test done before starting any procedure? Diana Warren has shown courage and passion for what she believes will help others on their journey with breast cancer. Thank you Diana for publishing this book.”

A Washington state resident was equally as impressed, adding, “Diana's highly informative, detailed research and courage is an inspiration as well as enlightening. Hopefully she will be able to help other unfortunate women with her insight into this terrible disease.”

‘Say No To Radiation and Conventional Chemo: Winning My Battle Against Stage 2 Breast Cancer’ is available now: http://amzn.to/1dw8Y1x. It can also be purchased from Barnes & Noble: http://bit.ly/1bSoKNp.

About Diana Warren
Diana Warren resides in Las Vegas, Nevada and is semi-retired from General Contracting in California. She is one of three business persons that founded Charter Pacific Bank, in Agoura, CA. Warren continues working with internet merchants facilitating them with processing credit cards. 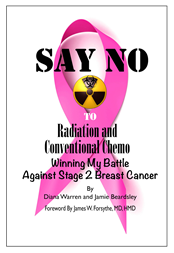