Written by M. Sid Kelly, the unique and quirky novel uses side-splitting humor and plausible science to thrust readers on a satirical journey of government bureaucracy, pseudoscience, conspiracies and even evolution. Of course, with Kelly’s wholly unique imagination, the story wouldn’t be complete without the addition of a wannabe celebrity fisherman – would it?

Arcata, CA -- (SBWIRE) -- 09/27/2013 -- While Science Fiction has been a staple of the literary landscape for generations, author M. Sid Kelly uses his debut fiction release to grab the genre by its throat and spit out what could be its most unique book yet. In an unlikely yet perfect melding of comedy, plainly far-fetched fiction and ‘real’ science, ‘Used Aliens: A Novel’ has stormed onto the scene with gusto.

The book’s narrative is a bizarre series of events that could only have come from the mind of someone like Kelly. However, while unconventional, the formula appears to be just what readers are demanding.

Aliens finally reach Earth, and in an awkward instant, the planet's future depends on the actions of one man. That man is Jimmy Fresneaux. Earth is in big trouble.

To determine whether Earth qualifies for entry into The Galactic Pool, the galaxy's greatest filmmaker arrives to secretly test Earthlings via recorded manipulations. A second cloaked ship carries two alien bureaucrats who monitor the production. The aliens like Jimmy's good looks and charm, so they test him as he practices to become the celebrity fisherman of his dreams.

But Jimmy can't catch enough fish to make an honest TV show. So when the monitoring ship crashes into Jimmy's fishing hole, one desperate alien claims he can find Jimmy some big fish. And the other alien looks great in a bikini. Now it's Jimmy's production.

This little mishap isn't entirely accidental. It's part of the saboteurs' plan to take over Earth. But these scheming galactic politicians could not have been prepared for Earthlings...

As the author explains, his narrative isn’t actually all that whacky.

“Many facets of the book are drawn from my own life experiences. I’ve spent a decade as a U.S. federal endangered species fish biologist/bureaucrat with a front-row seat to witness the political manipulation of science. I also served for two years as a Peace Corps volunteer in West Africa; I’m a weekend paleontology enthusiast; and in high school I was a wannabe pro bass fisherman,” says Kelly.

Continuing, “Through satire, my novel warns of the dangers of pseudoscience, and illustrates the importance of logic and critical thinking when making policy decisions based on science. The story also illustrates one mechanism by which politicians can take advantage of politically-naïve scientists. However, these ‘heavy topics’ are presented in a fun and absurd story, so people don’t get bogged down in dry material.”

It appears to be working with great success. Reviews to date have been overwhelmingly positive.

"This is a work of splendid quality and is recommended for anyone who loves galactic scale conspiracy and stupidity and a side splitting comedy that is also relatively scientifically sound," says Paul Little of LittleEbook Reviews.

D. L. Morrese, author of ‘The Warden Series’ was equally as impressed, adding, "...insightful satire, intelligent wit, an imaginative setting, unique aliens, and even a bit of real science."

About M. Sid Kelly
M. Sid Kelly lives on the far north coast of California. He grew up in an Air Force family living on bases from England to Germany to The Philippines to Mississippi and places in between. He served as a U.S. Peace Corps Volunteer in Mali, West Africa from 1992 to 1994. He formerly worked in the U.S. federal endangered species program on Pacific salmon conservation. For the past nine years he has worked as a consulting fish biologist specializing in helping agencies and contractors avoid impacts to endangered fish and their neighbors while replacing old bridges. Sid enjoys tidepooling, nature photography, collecting things from the ground (fossils mostly), jazz, travelling, and enjoying the company of his awesome wife and daughter. He is a graduate of Humboldt State University. 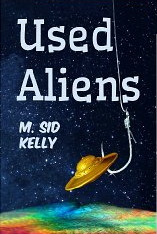