Bruce Zielsdorf’s narrative treks across the globe during the 1990s Bosnian holocaust, as one teenage soccer star escapes to America to join the U.S. Army. While ultimately fiction, Green Card Soldier embodies the stories of the 30,000 refugees currently dedicating their careers and lives to the United States’ military.

Ashland, OR -- (SBWIRE) -- 01/16/2014 -- Set amidst the civil war-ravaged Balkans of the early 1990s, the novel Green Card Soldier fuses fact with fiction to tell the story of Andro Babich – a naïve Bosnian teen soccer star who escapes to America where he earns refugee status, receives a “green card” and joins the U.S. Army – ultimately earning citizenship and a new life.

The author, Bruce Zielsdorf, is a 23-year Air Force veteran and retired Army civilian public affairs specialist. “This is an historic novel based on true events,” Zielsdorf explains. “I’m convinced a lot of people are intrigued by the military’s citizenship program and want to learn more. Andro’s story personifies the tens of thousands of refugees who have served the nation as non-citizens.”

Synopsis: Green Card Soldier is the story of Andro Babich, a naive, but inquisitive Bosnian teenage soccer star. His tale is told by Heath Winslow, a cynical, self-deprecating war correspondent. Set amidst the civil-war ravaged Balkans of the early '90s, Winslow recounts Andro's exploits, including his daring escape to America where he receives a green card and joins the U.S. Army, ultimately earning his citizenship and a brand new life. Eventually he returns to post-war Bosnia-Herzegovina as a U.S. AID worker and discovers, through trial and tribulation, his life's purpose and his role in the rebirth of his homeland.

According to the Defense Department, there are currently 30,000-plus non-citizens (about 1.6 percent of the force) serving on active duty. More than 4,100 of these unique Soldiers deployed to Iraq and Afghanistan in all branches of the U.S. military.

“Since the Revolutionary War, it’s not been uncommon for refugees to take pride in America and want to show their patriotism by serving,” the author notes. “Although newspaper, magazine and blog coverage of “green card” troops has been extensive, little has been done to tell the story through the heart and mind of a Green Card Soldier. Through this literary voyage, that’s what I attempt to do.”

Green Card Soldier is being printed by Hellgate Press of Ashland, Ore. The publishing house’s primary niche is military history and veteran memoirs, but it also specializes in non-fiction travel, historical and adventure fiction.

Order information is available online at the publisher’s website: http://hellgatepress.com/bruce-zielsdorf/green-card-soldier

About Bruce Zielsdorf
For almost 40 years, Bruce Zielsdorf has worked as a military journalist, newspaper editor and Army civilian public relations practitioner at locations around the globe. From drafting feature stories during the Vietnam era through coverage of the Lake Placid Olympics, he's documented airmen at work worldwide through his writing, editing and photographic skills -- an Air Force career that spanned 23 years. Today, Bruce lives in Killeen, Central Texas. 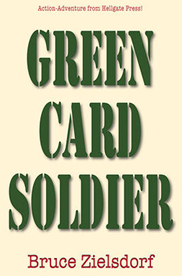