Slovenia -- (SBWIRE) -- 01/02/2014 -- Video Chef, a specialist in animated explainer video production, has announced the release of The Crisis of Fukushima Radiation Visualized, which explains the damage and subsequent crisis related to the nuclear power plant after an earthquake and tsunami in 2011. It begins by showing how the damaged caused water to leak out of one reactor, causing it to heat up and catch fire.

The video also talks about the three other reactors. These overheated and no one has been able to go inside since. It then goes on to compare the Fukushima disaster to Chernobyl in 1986. The concern for radiation is real, as it is entering the Pacific Ocean at a rate of about 300 tons per day. Removing the fuel rods is dangerous. An animation portrays how delicate they are and how much radiation could be released if they break.

A plan to remove the fuel rods in the coming weeks is discussed next, before the reactor building collapses. The importance of iodine in boosting the immune system is highlighted. One last point states the fact that the Fukushima disaster is global in scale. With the narration and illustration, The Crisis of Fukushima Radiation Visualized is easy to understand and intended for viewing by anyone, including 6th graders.

The company’s intention was to create an educational video for their promotional purposes. Videos that could be understood by as much of the population as possible. In addition to Fukushima video, in previous month they`ve released »The Case of Edward Snowden visualized«. You can watch it here: http://www.youtube.com/watch?v=dPT6bYggalc

Video is the fastest growing form of content on the web. An explainer video for Fukushima is just one example of how information is being conveyed through this medium. In fact, by the end of 2014, 90% of online content is predicted by experts to be video. Dr. James McQuivey of Forrester Research has estimated one video is equal to about 1.8 million words.

At Video Chef, production experts understand how important video is and the power it has in capturing the attention of customers. The company can help clients sell products or services or explain complex topics through storytelling and animations. It is not simply cartoons the company aims to create. Video Chef explains things in an easy-to-understand way, building on the fact there’s only 10 seconds to grab someone’s attention, and building trust with the customer happens within the first few minutes.

Businesses have increased revenue by at least 20%, just by producing a video, according to Video Chef. Customized animation is also very effective in promoting a company or individual. One also has to make sure the target viewers understand what’s being presented. The popularity and potential reach of videos cannot be underestimated, as they are the focus of the top three most popular sites in the world: Google, Facebook, and YouTube.

Video Chef understands the importance of having a good video. The animated explainer video production company not only knows how to make effective videos; it creates ones everyone can understand. Services include sales and how-to videos, animations, and general web videos for businesses, individuals, and on any subject.

See The Crisis of Fukushima Visualized can be seen at http://www.youtube.com/watch?v=PgtYWC4Q1k0.

To learn more about the company, or order a customized explainer video, visit its website at http://videochef.co.

About Video Chef
Video Chef is animated explainer video production company. Based in Europe and the United States, it employs highly skilled designers and media experts able to produce animated videos and infographics for businesses to increase sales. Experts craft each animation and graphic to explain things so they can be understood by anyone. 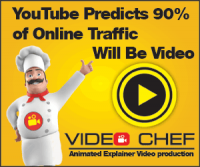