Virginia Beach, VA -- (SBWIRE) -- 07/22/2015 -- Nataline Mary Sarkisyan (Armenian: July 10, 1990 – December 20, 2007) was an American teenager with recurrent leukemia. Her case became part of the health care reform debate in the United States in 2007 when Cigna HealthCare denied coverage for a liver transplant operation. The company later reversed its decision after a great deal of media attention to her story, but Sarkisyan died hours later.
Donate Today to Help Children with Cancer!

Among the groups who publicly spoke out against Cigna's decision was the California Nurses Association/National Nurses Organizing Committee. After public media attention grew, Cigna reversed its decision, but offered to pay for the transplant itself when it made the exception to the policy. Cigna's reversal of its policy, offering to pay for the transplant, came several hours before Sarkisyan's death. The annual proceeds of ticket sales to the fashion show, together with benevolent contributions to Fashion Legacy, will provide grant scholarships to eligible students attending a fashion or culinary learning institute, Medical school or Photography. Help Nataline Sarkisyan Succeed!

The chief of the Baylor Regional Transplant Institute in Dallas, Dr. Goran Klintmalm, said this particular operation was a "very high-risk transplant." Dr. Klintmalm did state that he would consider the same operation on a similar patient. On December 11, 2007, Cigna rejected the request for coverage for the liver transplant. Sarkisyan's doctors at the UCLA Medical Center, including the head of its transplant unit, wrote a letter to protest that the treatment proposed was neither experimental nor unproven and called on Cigna to urgently review its decision. Please DONATE TODAY to help Nataline Sarkisyan's legacy!

Cigna HealthCare refused to pay for treatment by citing policy-provisions which do not cover services considered experimental, investigational and/or unproven to be safe and/or effective for the patient. Cigna noted that it had no financial-stake in the decision because it only administered the insurance-plan and would not bear the cost of any operation. The cost of a liver transplant, and one year of follow-up care, was $450,000 in 2005. UCLA declined two livers while waiting for insurance-approval from Cigna. Ms. Sarkisyan's family was informed that they could proceed with the transplant if they could make a down-payment of $75,000.

About The Foundation
Nataline's family set up the Nataline Sarkisyan Foundation, which helps students who share Nataline's dreams of pursuing fashion design, culinary art and those who want to pursue careers in helping the ill. The Idea for the foundation started with a sketchbook. A sketchbook filled with one young girl's aspirations to become a fashion designer. From this sketchbook came the inspiration to hold an annual fashion show honoring its owner, Nataline Sarkisyan. After seventeen-year-old Nataline tragically lost her life to leukemia in December of 2007, her family sought refuge in the dreams she had left behind. Upon discovering Nataline's sketchbook and studying the pages of clothing she had designed, her family knew exactly how to celebrate their beloved daughter's memory. 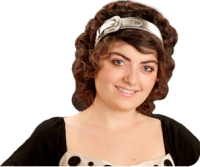